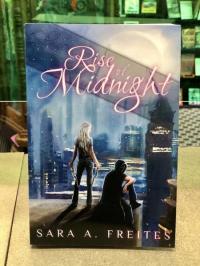 by Sara A. Freites

At seventeen, Autumn Hayes is no different than any other high school student. But after a strange dream one night, some unwanted changes come her way, dark figures following her, unsettling stares, a tragedy hitting close to home...

Autumn soon finds herself held captive by a group of individuals calling themselves “vampires”. From them, she learns she's not who she's always thought and that she must play a key role in sending a powerful demon back to hell. Things get more complicated for Autumn and the vampires when they capture an alluring stranger named Blake. He’s not like the others, and he’s sparked their curiosity...especially Autumn’s.

Now, Autumn must leave behind everything she’s ever known and accept her new fate, fighting to prevent a possible hell on Earth.

But will she lose her humanity in the process?

Log in to get emails when Sara A. Freites has something new.