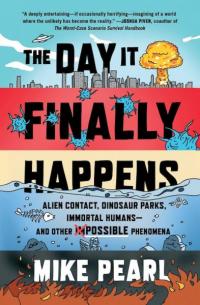 Inspired by the his popular VICE column "How Scared Should I Be?" Pearl games out many of the "could it really happen?" scenarios we've all speculated about, assigning a probability rating, and taking us through how it would unfold. He explores what would likely occur in dozens of possible scenarios, among them the final failure of antibiotics, the loss of the world's marine life, a complete ban on guns in the US, and even the arrival of aliens, and reports back from the future, providing a clear picture of how the world would look, feel, and even smell in each of these instances. The result is entertaining, accessible pop science that is oddly comforting.

Log in to get emails when Mike Pearl has something new.