Home / Store / Books / Conspiracy to Riot: The Life and Times of One of the Chicago 7 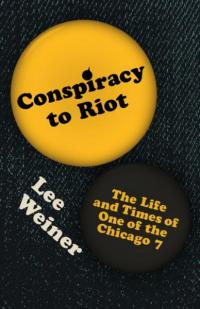 Conspiracy to Riot: The Life and Times of One of the Chicago 7

A firsthand account of the 1968 DNC protests and the infamous Chicago 7 trial from one of the defendants. In March 1969, eight young men were indicted by the federal government for conspiracy to incite a riot. Some of them barely knew one another, having come together briefly to protest the 1968 Democratic National Convention in Chicago and the war in Vietnam. First dubbed the “Conspiracy 8” and later the “Chicago 7,” the group included firebrands like Abbie Hoffman and Bobby Seale, but also a little-known community activist and social worker named Lee Weiner, who was just as surprised as the rest of the country when his name was called. The ensuing trial of the Chicago 7 was a media sensation, and it changed Weiner’s life forever. But as he recalls in his memoir, the trial of the Chicago 7 was part of a long tradition of American radicalism that had shaped him from an early age and remain directly relevant to today's efforts to change America for the better. From Weiner’s Jewish family's leftist political roots to wild anti-war demonstrations on the streets and high-profile political appointments, Conspiracy to Riot shows how commitment to your ideals can change your destiny, for better and for worse.

Log in to get emails when Lee Weiner has something new.