Home / Store / Books / Black In the Middle: An Anthology of the Black Midwest 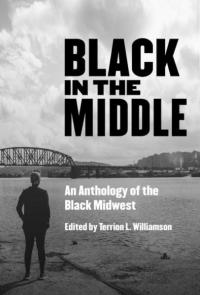 Black In the Middle: An Anthology of the Black Midwest

As per the publisher: Black Americans have been among the hardest hit by the rapid deindustrialization and accompanying economic decline that have become so synonymous with the Midwest. Since the 2016 election, many traditional media outlets have renewed attention on the conditions of “Middle America,” but the national discourse continues to marginalize the Black people who live there. Black in the Middle brings the voices of Black Midwesterners front and center. Filled with compelling personal narratives, thought-provoking art, and searing commentaries, this anthology explores the various meanings and experiences of blackness throughout the Rust Belt, the Midwest, and the Great Plains. Bringing together people from major metropolitan centers like Detroit and Chicago as well as smaller cities and rural areas where the lives of Black residents have too often gone unacknowledged, this collection is a much-needed corrective to the narrative of the region. Pieces by Kevin Young, Jordan Weber and more.

Log in to get emails when Terrion L. Williamson has something new.