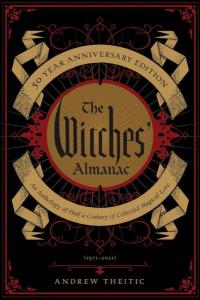 Witches' Almanac 50 Year Anniversary Edition: An Anthology of Half a Century of Collected Magical Lore

This anthology of articles spanning the five decades that The Witches' Almanac has been published (founded in 1971 by Elizabeth Pepper). Pepper's literary heir (Andrew Theitic) has continued, as well as expanded, the mission of The Witches’ Almanac’s, that which provides both a voice for the growing collective magical and Craft community. Topics include: cats, goats, crystals, scarabs, recipes, spells and more. You name the witchy Wiccan thing and it's probably in there. Includes 200+ b+w line drawings.

Log in to get emails when Andrew Theitic has something new.