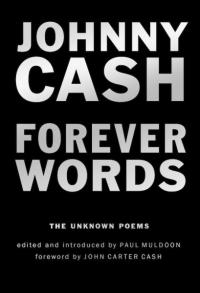 Now in paperback, the collection of poems and song lyrics, discovered in the Cash family archives and published for for the first time in the 2016 hardcover, with copies of original handwritten documents from the legendary Johnny Cash, edited by Pulitzer Prize-winning poet Paul Muldoon and with a preface by John Carter Cash. Since his first recordings in 1955, Johnny Cash has been an icon in the music world. Now comes a collection of as-yet-unpublished poems and song lyrics by Cash. In these words, we see the world through his eyes, his reflection upon his own interior reality, his frailties and his strengths alike. The poetry reveals his depth of understanding; both of the world around him and within. He pens verses in his hallmark voice, reflecting upon love, pain, freedom, and mortality. He also reveals insightful observations upon culture, his family, his fame, and even Christmas. Illustrated with facsimile reproductions of Cash’s own handwritten pages, Forever Words is a remarkable new addition to the canon of one of America’s heroes. Specifically, it confirms Johnny Cash as a brilliant American literary figure. His music is a part of our collective history, but here the depth of his artistry and talent become even more evident. Edited and with and introduction by Paul Muldoon, as well as a preface by John Carter Cash, this is a book sure to delight and surprise fans the world over.

Log in to get emails when Johnny Cash has something new.