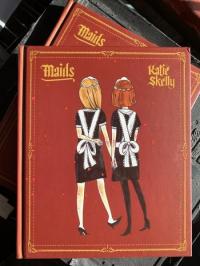 The scandalous true crime story about the Papin Sisters, as told by one of comics' most stylized talents. Christine Papin, an overworked live-in maid, is reunited with her younger sister, Lea, who has also been hired by the wealthy Lancelin family. They make the estate's beds, scrub the floors, and spy on the domestic strife that routinely occurs within its walls. What starts as petty theft by the maids, who are flashing back to their tumultuous time in a convent, shortly turns into something more nefarious. Madame Lancelin’s increasingly unhinged abuse ignites the sisters' toxic upbringing and social class exploitation and explodes into a ghastly double murder, an event that shocked and fascinated 1930s France and beyond. Maids has high bravura and high intrigue, all drawn in Skelly’s highly stylized manner, which combines the best of pop art, manga, and Eurocomics. Inspired by Genet's The Maids, Skelly puts her own spin on the story, from a woman's perspective as a form of socioeconomic warfare. Maids is both a true crime saga as well as an allegory of societal collapse; the Papin Sisters' story is as relevant in 2020 as it was in the 1930s.

Log in to get emails when Katie Skelly has something new.