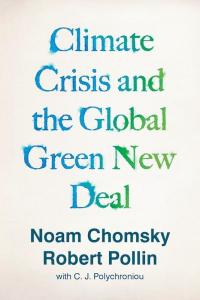 Climate Crisis and the Global Green New Deal: The Political Economy of Saving the Planet

Climate change: watershed or endgame? In this compelling new book, Noam Chomsky, the world’s leading public intellectual, and Robert Pollin, a renowned progressive economist, map out the catastrophic consequences of unchecked climate change -- and present a realistic blueprint for change: the Green New Deal. Together, Chomsky and Pollin show how the forecasts for a hotter planet strain the imagination: vast stretches of the Earth will become uninhabitable, plagued by extreme weather, drought, rising seas, and crop failure. Arguing against the misplaced fear of economic disaster and unemployment arising from the transition to a green economy, they show how this bogus concern encourages climate denialism. Humanity must stop burning fossil fuels within the next thirty years and do so in a way that improves living standards and opportunities for working people. This is the goal of the Green New Deal and, as the authors make clear, it is entirely feasible. Climate change is an emergency that cannot be ignored. This book shows how it can be overcome both politically and economically.

by Noam Chomsky and Marv Waterstone