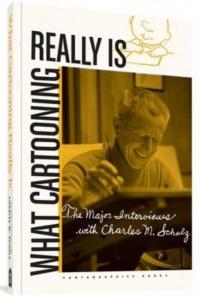 What Cartooning Really Is: The Major Interviews with Charles M. Schulz

A collection of insightful interviews with the creator of the most popular comic strip of all time. Everybody knows the iconic characters of Peanuts, but few are privy to the character of the man who created this beloved cast and the world they inhabit, Charles M. Schulz. To illuminate the life story and rich inner life of the renowned cartoonist, Fantagraphics presents four of the most comprehen­sive interviews ever conducted with Schulz, by film critic Leonard Maltin, novelist Laurie Colwin, Comics Journal editor and critic Gary Groth, and comic strip historian Rick Marschall. These conversations delve into the moral, aesthetic, and intellec­tual foundations of Schulz’s worldview and art. They reveal him to be a man who embodies elements of all of his characters, from the goofiness of Snoopy to the melancholy of Charlie Brown to the brashness of Lucy and more, but who also contains depths of personality far beyond the borders of his strip. Copiously illustrated with Peanuts strips and other comics and illustrations, What Cartooning Really Is humanizes Charles M. Schulz, the man who drew Snoopy.