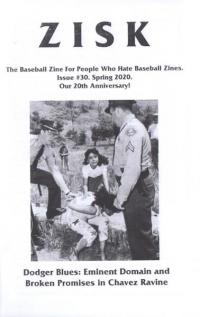 As per Razorcake.com: Zisk, “the baseball zine for people who hate baseball zines,” celebrates its twentieth anniversary by dedicating the entire issue to a single, albeit important, article. “Dodger Blues: Eminent Doman and Broken Promises in Chavez Ravine,” by one Todd Taylor of Razorcake (and before you start howling “conflict of interest,” trust that I would’ve personally told Todd if I thought the piece wasn’t up to snuff, and he would’ve wanted me to. He’s family, and sometimes family has to have some tough convos… but not in this instance), recounts the tale of how Dodger Stadium came to be perched on a hill overlooking downtown Los Angeles. Starting from the earliest historical references to an area previously known as Stone Quarry Hills, and ending at its current appellation “Dodgertown,” which has its own fucking zip code and zero population, the story is one of how a city destroyed a cluster of barrios dating back more than a century and ham-fistedly displaced residents via greed, graft, grift, not-so-subtle racism and aided, oddly enough, by some misguided good intentions to make way for the use of public land by a private “entertainment” company. It’s heavy, complicated subject matter, to be sure, but it’s told deftly, balancing some seriously deep research with keeping things focused and direct, and even ends with a suggestion on a way to make amends for all the trauma caused, however late or small they may be. I’m sure Dodger fans will groan and complain, but it’s nonetheless an important story, one not only about baseball, but also of how the wealthy can do anything to get what they want in a city that too often has no respect for its own history and beauty. Tip of the beret to Todd for a job well done and to Zisk for getting the history out to a wider audience.