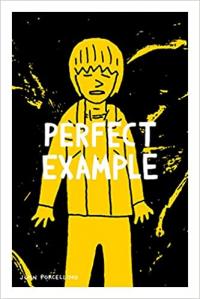 Brimming with empathy and a charming, self-aware wit, Perfect Example is King-Cat zinester John Porcellino’s coming-of-age memoir about the momentous, but seemingly never-ending year between the end of high school and the start of university. His year spans awkward house parties, first kisses, guitar practice, and the cultivation of new friendships. Yet, even though he has a new girlfriend, and goes on spontaneous road trips to sneak in to 21+ concerts, Porcellino is plagued by incessant sadness, seeking him to contemplate suicide. As he traverses the 1980s Chicago suburbs on his skateboard, Porcellino seeks to engage with society all the while struggling to keep his own sadness at bay. When he fails to remedy his depression, he turns inward, offering illuminating graphic depictions of psychological distress.

Pocellino’s minimalism proves uniquely evocative in this novel, revealing the universality of his narrative. His auto-biographical renderings frame difficult experiences within the context of empathetic reflection, offering up a new way for us to read our own pasts, and be kind to our younger selves. In his transparency and attention to the minute details of human interaction, Porcellino’s inventive storytelling is as affecting now as it was upon its original distribution in mini comics.

To celebrate the re-release of John Porcellino's work, don't miss these readings of his work John's contemporaries in the comics world.

Log in to get emails when John Porcellino has something new.