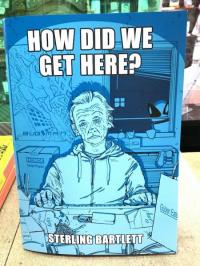 How Did We Get Here

Courtesy of First to Knock: How Did We Get Here? is an interplanetary gripe session in the form of a comic book. Its target: pretty much everything. This postmodern hellfire sermon (delivered by a para-physical, ultra-terrestrial entity named Void) pinpoints the micro-absurdities and inconvenient perpetrators feeding the downward slide of contemporary culture. Hooks are thrown right and left in an attempt to halt our earthly souls from becoming completely quantified, price stamped, and sold to the highest bidder.

And at a portable 32 pages, you can carry How Did We Get Here? everywhere, allowing you to never forget the relentless commodification of art and life in the 21st century. It’s a souvenir program from the greatest show on earth.

How Did We Get Here? was conceived, written, and drawn by veteran painter and illustrator Sterling Bartlett. In his 20 year career as a fine artist, Bartlett’s work has been exhibited across North America, the UK, Denmark, & Greece. Juxtapoz has called him a man with “an authoritative understanding of fringe cultural mythologies” and his visual style is as wide-ranging. Bartlett lives in Los Angeles with his girlfriend, their cat, and dog.

Log in to get emails when Sterling Bartlett has something new.