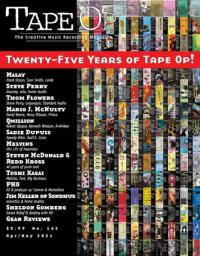 This April marks 25 years of Tape Op Magazine. I cannot believe the little photocopied ‘zine-like-thing that I began in 1996 is still around, let alone now reaching so many people. Our focus has shifted and widened over these years, and it has changed along with the times and technology. In 1996 I knew hard disk recording would supersede analog tape and tape-based digital tracking at some point, but I would have been hard-pressed to predict plug-ins and mixing in the box! It’s interesting as well to look back and remember that I was running an 8-track analog studio in my basement for $10 an hour when Tape Op began.

Even though I founded this magazine, once it got rolling Tape Op became the product of a community of people spread across the world. When John Baccigaluppi joined up as a partner in 1999, we increased our circulation ??" and our goals. I’m lucky to have such an incredible friend with me at the helm. Many people have helped massively along the way; there’s not enough room on this page to thank them all. Our current team is one of the most amazing groups of people I have ever worked with, so many thanks to Marsha Vdovin, Scott McChane, Geoff Stanfield, Anthony Sarti, Jordan Holmes, Thomas Danner, Maria Baker, Jay Ribadeneyra, Jon Ulrigg, Andy Hong, our many contributing writers and reviewers over the years, and Jenna Zine Crane, my love who keeps my head on straight and the writing looking smart. We also miss the folks who had major input in years past, like Laura Thurmond, Al Lawson, Dave Middleton, Hillary Johnson, AJ Wilhelm, Brian Shevlin, Kerry Rose, and so many others. Thanks are certainly due to the support of every advertiser we’ve had along the way, and we’re honored for the trust they’ve placed in us. None of this journey would be possible without our readers; we are grateful to everyone out there, and for the feedback we get.

Tape Op was named after the lowly “tape operator,” as seen in UK studios in the ‘50s and ‘60s. It was a job that was essentially a “human tape deck remote” that became the entry position for many engineers. The person who was in the room and learning the craft was the concept behind the name of this magazine, and it still resonates at the core of all we do. There is always so much more to discover, so we carry on, tracking music in a myriad of ways and making art. Oh, yeah; and talking with others about their journey through this world as well!

Thank you for reading and for the ongoing support! We’re excited to continue on this journey with you.