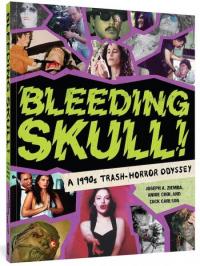 by Zack Carlson, Annie Choi and Joseph A. Ziemba

Shapeshifting Hare Krishna demons who crash a BBQ, Mexican Freddy Kruegers, and two dinosaurs that dump body parts into a tiny swimming pool, brought to you by the maniacs behind Bleeding Skull!: A 1980s Trash-Horror Odyssey and Destroy All Movies!!! The Complete Guide to Punks on Film!

A celebration of the most obscure, bizarre, and brain-busting movies ever made, this film guide features 250 in-depth reviews that have escaped the radar of people with taste and the tolerance of critics -- Gorgasm! I Was a Teenage Serial Killer! Satan Claus! Die Hard Dracula! Curated by the enthusiastic minds behind BleedingSkull.com, this book gets deep into gutter-level, no-budget horror, from shot-on-VHS revelations (Eyes of the Werewolf) to forgotten outsider art hallucinations (Alien Beasts). Jam-packed with rare photographs, advertisements, and VHS sleeves (most of which have never been seen before), Bleeding Skull is an edifying, laugh-out-loud guide to the dusty inventory of the greatest video store that never existed.