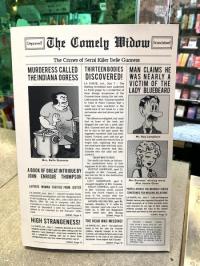 I am glad he is dead! Terrible people deserve terrible endings! -Belle Gunness

On April 28, 1908 an arson at a farmhouse in the small farming community of La Porte, Indiana exposed a series of murders so horrendous that it became the center of international attention. Belle Gunness, a Norwegian immigrant, used her farmhouse as the base of operations for a lonely hearts scheme that claimed the lives of at least thirteen victims and perhaps dozens more. No one was safe from her including her own family. Using a combination of murder, insurance fraud, and other schemes, Gunness was able to amass a small fortune while at the same time, making her one of the most prolific female serial killers in history.

Join us in examining her life and crimes while remembering the victims of her deeds. At the same time, learn a little something about the history of a slew of comic strips, cartoon characters, creators, publishers, and studios that the people from the story are modeled after.

This easy to read, yet highly engaging story, heavily researched by artist and historian, John Enrique Thompson, helps to set the record straight on these historic crimes as well as educate and entertain. The Comely Widow: The Crimes of Serial Killer Belle Gunness is a graphic narrative true crime book that is sure to enthrall you and the comic or true crime fanatic in your life.

Log in to get emails when John Enrique Thompson has something new.

by Robin Bougie and Maxine Frank