Home / Store / Books / Beam of Sunlight in the Deep Forest 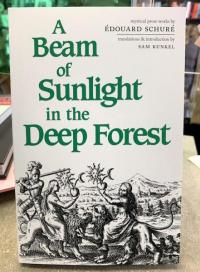 Édouard Schuré was a 19th century French author and occultist who spent his life attempting to translate the ineffable realm of spiritual knowledge into literature. Prolific and enigmatic, Schuré navigated many of the seminal movements of his time, developing friendships with prominent figures such as Friedrich Nietzsche, Stéphane Mallarmé, and Richard Wagner. Yet, despite these affinities, Schuré refused to adhere to any one group or dogma. Perhaps due to his singular persona, he has since lived in a netherworld of historical neglect.

A Beam of Sunlight in the Deep Forest is a landmark collection of Schuré’s prose works, offering a robust introduction to the forgotten figure. Among the texts included are the never-before-translated Proses mystiques, short pieces invoking disembodied voices, philosophical anguish, and dark woods haunted by a virgin cloaked in a panther pelt. Central to the collection is The Angel and the Sphinx, Schuré’s hallucinatory novel of sexual possession and spiritual longing set against a Germany of fog‐enshrouded mountaintops infused with black magic. Also included is "Aeolian Harps," a never-before-translated reminiscence of a boyhood mystical experience at the Baden spa, as well as an examination of notable correspondence with Nietzsche, Mallarmé, and Wagner. Taken together, these texts offer truths about the artistic process and the spiritual development of humanity in the face of an ever more industrialized, and secularized, world.

All texts in A Beam of Sunlight in the Deep Forest are newly translated and presented with an introduction by Sam Kunkel, a scholar of 19th century religious literature. Kunkel has also provided translations for the First To Knock collection ﻿Echoes of a Natural World: Tales of the Strange & Estranged﻿.

“[Schuré is], in our time, the sole man of persuasion for whom the few Mysteries which haunt some of us are natural and part of a magnificent birthright.” -Stéphane Mallarmé

Log in to get emails when Édouard Schuré has something new.

by Nathaniel Winter-Hébert and Nina Antonia

by Quimby's Bookstore and Plastic Crimewave

Slug and Other Stories