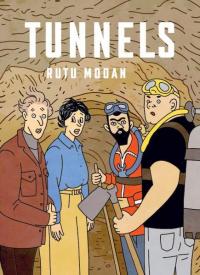 A race for the Ark of the Covenant finds an exploration into the ethics and world of the international antiquities trade.

When a great antiquities collector is forced to donate his entire collection to the Hebrew University in Jerusalem, Nili Broshi sees her last chance to finish an archaeological expedition begun decades earlier, a dig that could possibly yield the most important religious artifact in the Middle East. Motivated by the desire to reinstate her father’s legacy as a great archaeologist after he was marginalized by his rival, Nili enlists a ragtag crew, a religious nationalist and his band of hilltop youths, her traitorous brother, and her childhood Palestinian friend, now an archaeological smuggler. As Nili’s father slips deeper into dementia, warring factions close in on and fight over the Ark of the Covenant!

Backed by extensive research into this real-world treasure hunt, Rutu Modan sets her affecting novel at the center of a political crisis. She posits that the history of biblical Israel lies in one of the most disputed regions in the world, occupied by Israel and contested by Palestine. Often in direct competition, Palestinians and Israelis dig alongside one another, hoping to find the sacred artifact believed to be a conduit to God. Two-time Eisner Award winner Rutu Modan’s third graphic novel, Tunnels, is her deepest and wildest yet. Potent and funny, Modan reveals the Middle East as no westerner could.Ishai Mishory is a longtime New York City, and newly Bay Area, based translator and sometimes illustrator. He is currently conducting research for a PhD dissertation on 16th century Italian printing.

Log in to get emails when Rutu Modan has something new.