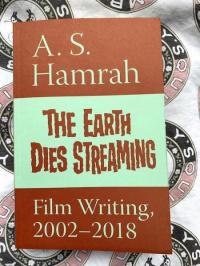 The Earth Dies Streaming collects the best of A. S. Hamrah's film writing for n+1, The Baffler, Bookforum, Harper's, and other publications. Acerbic, insightful, hilarious, and damning, Hamrah's aphoristic capsule reviews and lucid career retrospectives of filmmakers and critics have taken up the mantle of serious American film criticism pioneered by James Agee, Robert Warshow, and Pauline Kael and carried it into the 21st century. Taken together, these reviews and essays represent some of the best film criticism in the English language. The Earth Dies Streaming showcases a remarkable critical intelligence while offering a cultural history of the cinema of our times.

Log in to get emails when A.S. Hamrah has something new.