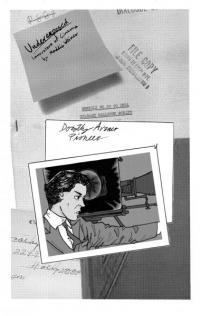 Dorothy Arzner (1897-1979) was the first female director in the Hollywood studio system. Arzner grew up surrounded by the movie business, and through sheer determination and tenacity she worked her way up the ranks from script girl to one of Paramount's best directors. Her films deconstructed the institution of marriage, the supremacy of the male gaze in storytelling, and the unfair expectations forced upon women, all through her unique perspective as an outsider, both as the sole woman among her peers and as a butch lesbian. She revolutionized sound cinema, discovered the likes of Katharine Hepburn and Lucille Ball, and laid the groundwork for female filmmakers to follow in her footsteps. Through interviews, critical theory, fictionalizations, and news stories, Dorothy Arzner: Pioneer reveals the hidden legacy of her ground-breaking pictures.

Underexposed: Innovators of Cinema is a comic series that recognizes the creative legacies of woman and LGBTQ filmmakers throughout film history.

Log in to get emails when Maddie Weiner has something new.