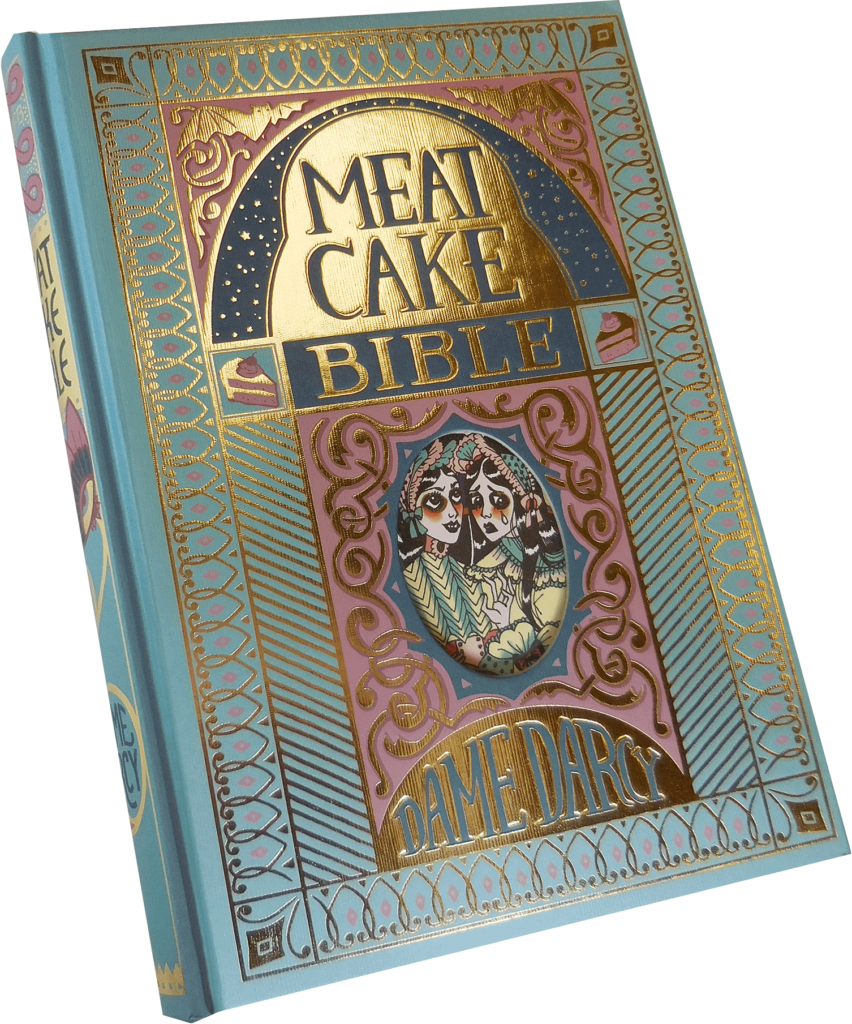 Dame Darcy is one of the sui generis artistic talents of the past two decades — musician, actress, fortune teller, dollmaker, Gen X/feminist icon, and last but not least, cartoonist to the core — and has been bewitching readers for more than 20 years with her neo-Victorian horror/humor/romance comic Meat Cake. Alternating between one-off (often cruelly tragic) fairy tales and ongoing romps starring her eclectic cast of characters, including Effluvia the Mermaid, the roguish rou. Wax Wolf, Igpay the Pig-Latin pig, Stregapez (a women who speaks by dispensing Pez-like tablets through a bloody hole in her throat), the mischievous Siamese twins Hindrance and Perfidia, Scampi the Selfish Shellfish, the stalwart Friend the Girl, and the blonde bombshell Richard Dirt, all delineated in her inimitable luxurious scrawl, Meat Cake is like a peek into the most creative, deranged dollhouse you ever saw. The Meat Cake Bible is the definitive collection of the series, collecting every story from all 17 issues (1993-2008) — including “Hungry is the Heart,” Darcy’s legendary collaboration with Alan Moore — as well as new stories from the unpublished 18th issue. A gorgeous, unjacketed hardcover edition replete with cloth deboss, gold foil stamping, and a die-cut cover.

Renaissance woman Dame Darcy won a scholarship to the San Francisco Art institute at the age of 17 in 1989. There she majored in film and animation, studying under George Kuchar and Larry Jordan. During this time, she self-published Meat Cake Comix; joined the band Caroliner with Lisa Carver, where she performed, released albums and toured; and illustrated Lisa’s magazine Rollerderby, as well as other Bay Area magazines and papers.

Darcy moved to New York in 1992. Her Meat Cake comic-book series began publication with Fantagraphics Books Inc., who publishes Meat Cake and its compilations, which are distributed internationally, to this day. 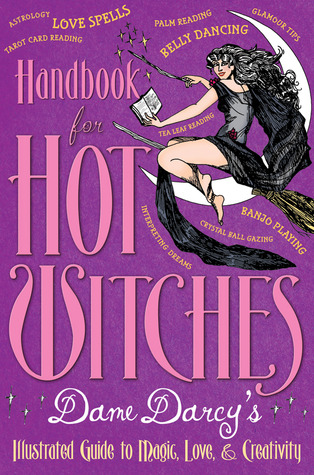 Just in time for Halloween! Quimby’s is excited to welcome Dame “Meat Cake” Darcy for her new book Handbook for Hot Witches.

Plenty of artwork to satisfy her comics and illustration fans both young and old, Dame Darcy combines a graphic novel with a dash of crafts, a sprinkle of feminist fairy tales, and a whole cauldron of spells and voilà! Handbook for Hot Witches: Dame Darcy’s Illustrated Guide to Magic, Love, and Creativity is the guide for girls who want cool things to do and great friends to do them with, who aren’t afraid to be their different, awesome selves. It’s a celebration of powerful, creative girls—the sort of girls who may have been called “witches” once, but who, as this book proclaims, are “hot,” because of their talent and their uniqueness. With sections on banjo playing, beauty spells, palm reading, and much more, this fully illustrated handbook will send girls of any age on their way to independence, creativity, and magic DIY-style.

“Part graphic novel, part New Age primer, with dashes of astrology and crafts and pinches of beauty hints, the book packs a lot into its 200 pages.” —School Library Journal

What others have said about Dame Darcy:

“Darcy’s comics are aesthetic manifestos. . . . Darcy is a star.” —The New York Times

“I think she’s exquisite, let’s put it that way. I wish I knew her in high school.” —Thurston Moore of Sonic Youth

“[Darcy] has created a childlike, otherworldly realm, a land that hovers in the twilight space between the whimsical and the macabre. Ghosts and goblins, foul-tempered stepmothers, lovesick mermaids and charmed forest are all rendered in Darcy’s distinctive hand, loose and flowing lines reminiscent of the work of Edward Gorey.” —The Los Angeles Times

Dame Darcy currently resides in New York City and Savannah, Georgia. She is known worldwide as an illustrator, writer, fine artist, musician, filmmaker, animator, environmentalist, and Cabaret Mermaid. Her illustrated titles include The Illustrated Jane Eyre, and she has been publishing her comic book series, Meat Cake, for twenty years. More info about her at damedarcy.com.
Tags: Dame Darcy, Handbook for Hot Witches, Meat Cake.