Home / Store / Books / You're the Only One I've Told: The Stories Behind Abortion 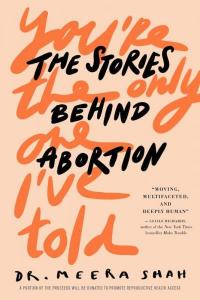 You're the Only One I've Told: The Stories Behind Abortion

Chief medical officer of Planned Parenthood Hudson Peconic tells the myriad stories of diverse individuals whose abortion experiences bring vital and threatened reproductive rights to life. For a long time, when people asked Dr. Meera Shah what she did, she would tell them she was a doctor and leave it at that. But over the last few years, Shah decided it was time to be direct. “I’m an abortion provider,” she will now say. And an interesting thing started to happen each time she met someone new. One by one, people would confide, at barbecues, at jury duty, in the middle of the greeting card aisle at Target, that in fact they’d had an abortion themselves. And the refrain was often the same: You’re the only one I’ve told. This book collects those stories as they’ve been told to Shah to humanize abortion and to combat myths that persist in the discourse that surrounds it. An intentionally wide range of ages, races, socioeconomic factors, and experiences shows that abortion always occurs in a unique context. Today, a healthcare issue that’s so precious and foundational to reproductive, social, and economic freedom for millions of people is exploited by politicians who lack understanding or compassion about the context in which abortion occurs. Stories have power to break down stigmas and help us to empathize with those whose experiences are unlike our own. They can also help us find community and a shared sense of camaraderie over experiences just like ours. You’re the Only One I’ve Told will do both.

Log in to get emails when Dr. Meera Shah has something new.