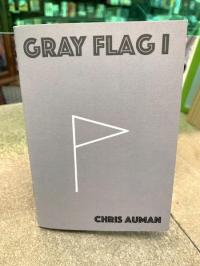 Chris sez: Wave the Gray Flag. My first publication is Gray Flag #1, which I hope to do in a series. The title comes from a rejected band name that I was really in favor of but was outnumbered. My fellow band members took it as a jokey play on our collecitve ages. To me, however, it's more about recognizing where you are in your life. We couldn't agree on that or anything else and the whole project fizzled out, but I dig the name so I repurposed it. I like the symbolism of gray. If black is the flag of anarchy and white is the flag of surrender, then gray is somewhere in between. The first issue is a collection of journal entries I wrote while I was a student at Columbia College in the early '90s. I’ve wanted to do something with them for the past 25 years. Now I have.

Log in to get emails when Chris Auman has something new.