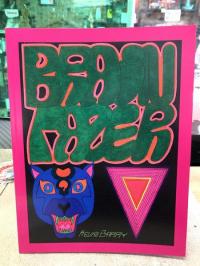 Kevin Barry's Brainfazer is a show stopping, psychedelic art trip that stretches the eyeball to dimensions never-before-traveled. The neon color work leads to compositions of such mind-boggling visual density that the initial breathtaking shock of first sight is usually followed by hours of meditation on the page. Yes indeed, Brainfazer is a debut art book from one of the most exciting new American visual artists to emerge in recent times. Comprising two series of drawings composed in the wee hours of the morning, Barry's book opens up strange dimensions of demented glee, extraterrestrial combat, and telepathic warnings. Throughout the book, Barry's knowledge of illustration and outré culture is apparent, 70s Japanese superhero television, classic Jack Kirby, European alchemical mandalas, paranoid science fiction paperbacks, Harry Smith, deadtech, and crackpot internet culture. And yet, Barry's art lives in its own universe entirely, calling to mind the hermetic ecosystems of outsider artists like Adolf Wölfli or Henry Darger in spirit, there is nothing like it. Brainfazer documents a beautiful visual language that is equally inspiring and far-out.

Kevin Barry is a science fiction artist from the San Francisco Bay Area. His work has shown at UFO Gallery, Teros Gallery, and Good Mother Gallery. He has been published previously by Komikaze Komics, and Teros Gallery Magazine. Barry also illustrated the book cover for First To Knock's Echoes of a Natural World: Tales the Strange & Estranged.

Log in to get emails when Kevin Barry has something new.