Home / Store / Books / Sketchbook of an Artist: George Hansen and the Craftsmanship of Cartooning 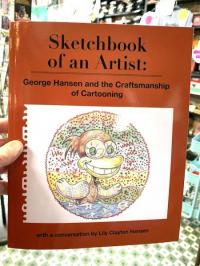 Sketchbook of an Artist: George Hansen and the Craftsmanship of Cartooning

Published by Word of Mouth Conversations

George Hansen, a cartoonist, and painter based in Chicago, Illinois, has been on the underground map since the 1960s. Hansen first broke onto the scene with his distinct drawing style, an affinity for bright colors, wicked sense of humor, and blend of sweetness and snarky. His paintings, cartoons, record, and magazine covers by the hundreds have oftentimes been compared to famed cartoonist R. Crumb, However, critics agree that Hansen's style is all his own and could be spotted at midnight from several miles away. For the first time in history, as requested by Hansen's fans, his daughter, author and actor, Lily Clayton Hansen, has put his work into a book format. The images, as curated by Lily, are taken directly from one of her father's most recent sketchbooks. As the Hansen's like to joke they are, "His less edgy images." Lily fell in love with them while hanging out and listening to records at her dad's apartment one morning. However, this one-of-a-kind book isn't reserved solely for cartoon fans. It is for anyone with a childlike spirit who appreciates art in all of its originality, realness, and authenticity. As one can see from Hansen's drawings, even the finest draftsmen still get pencil smudges on their pages. Ya want to know why? Because a living, breathing human being made them and chose not to bring PhotoShop into the picture. Yet, the true intention of these pages is to bring joy to the viewer, especially during dark times. Art has always been what makes Hansen (and his daughter) happiest. He still gets up and sketches every single morning (after pouring his cup of coffee of course??"let's not get too ambitious!) and hopes these images put a smile on the viewer's face. It was there when he was making them and is his way of giving readers a bit of the elation that drawing brings to him. C'mon, let's get happy!