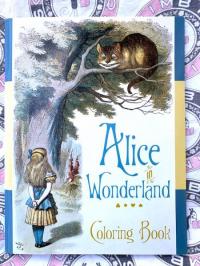 Inside this coloring book are twenty outlined illustrations from The Nursery Alice: Containing Twenty Coloured Enlargements from Tenniel's Illustrations to Alice's Adventures in Wonderland, which Carroll adapted for children from nought to five. Tenniel's full-color illustrations are reproduced on the inside of the front and back covers. There are also a few blank pages at the end of the book, so you can draw and color your own adventures as well as Alice's. Millions of readers know and love Alice's Adventures in Wonderland, but far fewer know that the first published edition of Lewis Carroll's beloved tale was illustrated by an English knight who was blind in one eye. Sir John Tenniel was a popular political cartoonist for the British humor magazine Punch when Carroll asked him to draw Alice. Tenniel's artistry, gentlemanly good humor, and political good taste had earned the admiration and respect of readers and politicians alike, and would lead to his knighthood in 1893.

Log in to get emails when Sir John Tenniel has something new.