Did you miss us last Saturday? We didn’t post new stuff because we were busy at The Comics and Medicine Conference selling books and hanging out with people like John Porcellino , Scott McCloud and Phoebe Glockner. The New York Times even did a little write up on it, so la la la!

Some super fun stuff in now: Henry “Chunklet” Owings’ Indie Cred Test, hilarious zines and comics from the dynamic duo Esther Pearl-Watson and Mark Todd, a second volume of Liz Baillie’s Freewheel, new graffiti stuff in both book and zine formats. Might we suggest for Father’s Day tomorrow the new issue of Serial Killers Unite? Or perhaps Spray Paint The Walls: The Story of Black Flag?

And finally! What are you doing tonight? Perhaps heading over to Punk Rock Karaoke at The Wicker Park Arts Center at 9pm?

ZINES & ZINE-RELATED BOOKS!
What I Did Today – May 5, 2011 $2.00 – Former Chicago-based “Proof I Exist” Billy Da Bunny (We miss you, Billy!) called up some friends and said, “What did you do today? Write me and I’l print it!” Very compelling if we don’t say so ourselves. (We just did.)
East Village Inky #47 by Ayun Halliday $3.00
Well Never Have Paris vol 8 Rejection $4.00
Mark #4 by Mark Todd $2.00 – From the funchicken vegas series.
Rumor Disneyland $2.00 – As in things rumored to be in Disneyland. Or possibly things contributors want to be in Disneyland. Hilarious.
Lovecrafts Pillow and Other Strange Stories by Kenneth W Faig JR (Moshassuck Press) $15.00 Spring Bust Mar 11 by Laura Wager $3.00
Welcome to Bend #6 Commute Options for Central Oregon $3.00
Friction #3 by Bostian $3.00
Permanent Vacation #1 Anywhere But Here by Kerry Ann Lee $20.00
Curb Kitchen #1 Spr 11 $3.00 Six Watercolors by Marieke McClendon $15.00
Fresh Kills – A Mindbank Production An Unfinished Experiment in Psychic Phenomonon (Drippy Bone Books) $3.00
Alchemy of Appropriation – The Science of Visual Theft and the New Collage $9.00
Serial Killers Unite #7 $2.00
Bands #1 Albuquerques Only Oct 13 – Subtle First Issue $1.00
Drinking Makes Your Heart Ache More Than It Should by Mandy Beaumont $6.00

GRAPHIC NOVELS & TRADE PAPERBACKS!
Freewheel vol 2 by Liz Baillie $15.00 – We love Liz Baillie’s work so much that we helped Kickstart her work. Now help us to support her by checking out her work!
Freshman Tales of 9th Grade Obsessions Revelations and Other Nonsense by Corinne Mucha (Zest) $12.99 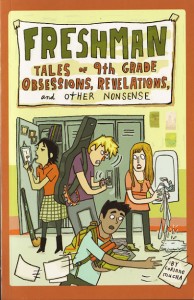 Remake Graphic Novel by Lamar Abrams (Adhouse) $12.95 – Like a sardonic cross between Astro Boy and Scott Pilgrim, Remake is 144 pages of silly action and crazy nonsense. Meet Max Guy, a robot boy who simply cannot stay out of trouble. Fortunately, he has this gun called the “Max Blaster” that turns things into stuff.
Walking Dead TPB vol 14 No Way Out by Kirkman etc. (Image) $14.99
Shots in the Dark: An Ink and Drink Comics Crime Anthology $11.99 – 21 stories in tribute to St. Louis
Hellboy vol 4 HC by Mike Minola (Dark Horse) $49.99 Proof vol 6 Endangered TPB – Death stalks Proof and the entire team of Lodge agents. Monsters take over Little Tokyo and at least one of Proof’s friends doesn’t make it out alive. The final turning point in the Proof saga.
Preacher Book Four by Garth Ennis (Vertigo) $39.99
New X-Men by Grant Morrison GN TP Book 2 by Grant Morrison (Marvel) $14.99
Sweet Tooth TPB vol 3 Animal Armies by Jeff Lemire (Vertigo) $14.99
Lost In a Mind Field: Schizophrenia and Other Psychoses by Neil Phillips $25.00
The Panic Book (Fourth Ed.) by Neil Phillips $20.00
Scars Stories and Other Adventures by MK Czerwiec $17.00
I Am Not These Feet by Kaisa $17.00 – True story about the author and her decision to amputate her feet to get rid of the foot pain.
FRANTIC by Peter Stringham $12.00
Captain Easy vol 2 1936-1937 – Complete Sunday Newspaper Strips Soldier of Fortune by Roy Crane (Fantagraphics) $39.99
Wandering Son vol 1 by Shimura Takako (Fantagraphics) $19.99
Who Is Ana Mendieta? by Christine Redfern and Caro Caron (Feminist Press) $18.95
Level Up by Gene Luen Yang and Thien Pham (First Second) $15.99

ART & DESIGN BOOKS!
Psycho Dream Factory by Caroline Picard (Holon Press) $22.00 – Each story PSYCHO DREAM FACTORY appropriates celebrity figures like paper dolls in order to enact a new and peculiar drama. Imagine Dr. Dre’s first experience coming on the Burning Man festival! Suppose MJ’s death was only a publicity stunt! What if Woody Allen found a protégé? These are just some of the scenarios you’ll entertain in this delightful volume. Introduction provided by Lily Robert-Foley, with delicious design created and covers printed by Sonnenzimmer and artwork included by the author. This full-color book was made in an edition of 100. Prior to its inclusion in “Happiness Machines” (an exhibit at Roxa Boxen Exhibitions) 25 copies of PSYCHO DREAM FACTORY were placed and left behind (with bar codes) in supermarket checkout aisles in Chicago IL. 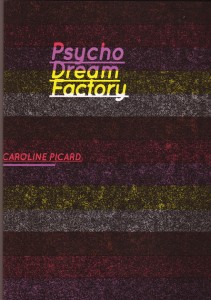 From the Platform: Subway Graffiti 1983-1989 by Paul Cavalieri (Schiffer) $34.99
Abegending by Anonymoose E Bardling $12.00 – The release of Abegending, a 153-page ride of prose experimentation filled with sentence fragments, neologisms and quasi-neologisms, syllabic stutterings and ultra-improvisatory ways of covering a page, will mark the debut of Perilous’ Records embrace of not only DIY experimental and indie music…but also DIY prose as well. The release is available in a limited edition of 200 copies.
World Piece: Global Graffiti Drawings by Sacha Jenkins and David Villorente (Prestel) $29.95 Monsters of Art: 20 Years of Havoc by Amber Grunhauser (From Here to Fame) $19.95
Arabic Graffiti by Pascal Zoghbi (From Here to Fame) $34.95

FICTION!
Elliot Allagash by Simon Rich (RH) $15.00 – A genial high school loser gets a life-changing makeover after meeting a fabulously wealthy malcontent. First full novel from this writer who has two (HILARIOUS) collections of short stories.
Curfew by Jesse Ball (Vintage) $15.00 – New work from this popular local writer about family, a mysterious kidnapping, and a dangerou voyage.
Hornbuckles Journal – New American Storybook by Gene Lubin $10.00
Millenium People by JG Ballard (Norton) $25.95
Robopocalypse by Daniel Wilson (Doubleday) $25.00
Child Garden by Geoff Ryman (Small Beer Press) $16.00 – A future city afflicted with a viral epidemic.
The Transformation of Bartholomew Fortuno by Ellen Bryson (SMP) $15.99 – Now in soft cover. Dont Stop Now by Julie Halpern – On the first day of Lillian’s summer-before-college, she gets a message on her cell from her sort-of friend, Penny. Not only has Penny faked her own kidnapping, but Lil is the only one who Penny told.

DIY & HOW-TO!
Generation V: The Complete Guide to Going Being and Staying Vegan as a Teenager by Claire Askew (PM) $14.95
Slippery Tipples: A Guide to Weird and Wonderful Spirits and Liqueurs by Joseph Piercy (History Press) $17.95 – From European favourites such as Mastichato Chios, which saved 2,000 Greeks from a bloody massacre at the hands of vengeful Turks, to legendary drinks such as Amarula, invented by African elephants; from classic cocktail ingredients like Midori, the bright green Japanese melon drink launched at the wrap party for Saturday Night Fever at Studio 54, to student stalwart Jagermeister, dreamt up by a confidant of Herman Goring and hugely popular among senior Nazis, Sippery Tipples tells the stories behind the word’s most extraordinary drinks. Alongside a country-by-country guide to murky and mysterious booze and dozens of cocktail recipes is a series of easy to follow recipes for making your own liqueurs and spirits. If you would like to concoct your own fruit brandies or make a drop of traditional full-strength Pimms then this is the book for you.
Greenblooded an Introduction to Eco Friendly Feminine Hygiene by Cathy Leamy $2.00 Wrongful Convictions – Causes Solutions and How You Can Get Involved by Rachel Schastok $2.50 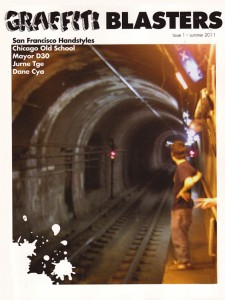 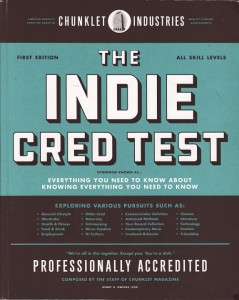 Spray Paint The Walls: The Story of Black Flag by Stevie Chick (PM) $19.95 – The story of Black Flag from the inside, drawing on exclusive interviews with the group’s members, their contemporaries, and the bands they inspired.
I Mix What I Like – A Mixtape Manifesto by Jared Ball (AK) $14.95 – Jared A. Ball, PhD, (a.k.a. The Funkiest Journalist) is the host of FreeMix Radio, and assistant professor of communication studies at Morgan State University in Baltimore, Maryland. This book has all sorts of music industry rants but with footnotes and bibiographic info.
Celebrity Vinyl by Tom Hamling (MBP) $19.95 – Now in soft cover! A laugh-riot reminder of what happens when famous people decide to (unsuccessfully) give singing a try. The number of celebrities, and pseudo-celebrities, that have indulged such hubris boggles the mind: Burt Reynolds, Shaquille O’Neal, John Travolta, Eddie Murphy, Leonard Nimoy, Alyssa Milano – the list goes on and on, as do the laughs. Over 100 photographs of the album art that houses these celebrity recordings are paired with gut-punch funny captions.
You Must Go and Win by Alina Simone (Faber) $14.00 – Ukrainian-born musician Alina Simone traces her bizarre journey through the indie rock world, from disastrous Craigslist auditions with sketchy producers to catching fleas in a Williamsburg sublet, all the while investigating her Russian roots.
Bob Marley: The Untold Story by Chris Salewicz (Faber) $16.00

MUCKRACKING, MEMOIRS, MAYHEM, MISCREANTS & MISCELLENOUSNESSESESNESS! Lunatic Express: Discovering the World Via Its Most Dangerous Buses, Boats and Trains by Carl Hoffman (Broadway) $14.00
The Murder of the Century: The Gilded Age Crime That Scandalized A City and Sparked The Tabloid Wars by Paul Collins (Crown) $26.00
How the Hippies Saved Physics: Science, Counterculture, and the Quantum Revival by David Kaiser (Norton) $26.95
Life Would be Perfect if I Lived In That House by Meghan Daum (Vintage) $14.95
Nerd Do Well: A Small Boys Journey to Becoming a Big Kid by Simon Pegg (Gotham) $27.50 – Memoir from Brit science-fiction superstar.
Sports From Hell: My Search for the Worlds Most Outrageous Competition by Rick Reilly (Random) $14.95
Half a Life by Darin Strauss (Random) $13.00 – A biker accidentally swerved in front of the author’s car and she got killed. It’s haunted him forever. Now in soft cover! OK THX BYE!

OTHER STUFF!
Gender and Comics Potluck 3 Print Set by Anne Elizabeth Moore and Esther Pearl Watson $40.00 – The delightful Esther Pearl Watson and Anne Elizabeth Moore (with assistance from James Payne) have culled thoughts, concerns, complaints, and expletives into a 6-page comics essay providing an occasionally frustrating view of the state of the comics industry, at least where women and trans people are concerned. The full essay, colored with the most delightful pinky mauve, is was in Bitch Magazine.
Harrison Trading Cards by Harrison “God Save the Zine” Rosenberg $2.00
Scumbabies DVD $15.00 – The slapstick horror musical fairytale about love and death.