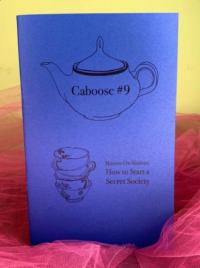 Caboose #9 Masons On Masons How to Start a Secret Society

by Liz Mason and Joe Mason

Yeah yeah, I'm writing a review for my own zine and posting it myself, because I'm a control freak, which makes sense because clearly, I control the media (insert maniacal laughter from behind a mask here). My husband and I did a presentation on fraternal orders and forbidden knowledge which then inspired this zine. But this zine isn't just us doing some research on a topic we were already interested in and then writing it up. We used the pre-existing Freemason-influenced society structure as a template for making your own order. We looked at things like the OTO, Tongs, the Yakuza, the Knights Templar and more, to see what is effective and ineffective in terms of establishing your secret society, DIY-style. But lest you think it's just a brotherhood frat party, we spent some time thinking about things from a feminist angle too; we all know that "auxilary/supplemental" groups for the ladies who can't be invited to join really means "added later" which means "you can have your special boring separate but not equal tea party," which really means "oh yeah, we don't care about you because you're a woman." We also tied things in with some of our favorite mayhem topics like occult, steampunk, anarchistic philosophy, Crowley, Masonic goat humor (yes, it's a thing) and more. Of course there are some hilarious graphics, if I don't say so myself. Also, my dad is a Shriner master Mason and he showed me his fezzes. -LM

Prizes Things My Dad Has Had to Take Out of Animals