Join Sgt. David J. Haynes of the Chicago Police Department, and his partner-in-crime, blogger Christopher Garlington on Tues, June 14th at 7pm as they talk about the places where they take a bite out of crime and also bites out of donuts, polish sausage, fried chicken, enchiladas, and omelettes. Peppered with outrageous stories from working cops, Chicago cop lore, and even a few recipes, The Beat Cop’s Guide To Chicago Eats takes you on a gustatory journey through all five Chicago areas, including some of the toughest neighborhoods in the nation.

Sgt. David J. Biscuit Haynes has spent the past 15 years dodging bullets and chasing down gang bangers on the city’s West Side, running Chicago’s first ever Homeland Security Task Force, and supervising squads in the 19th District at Belmont and Western.  Christopher “The Bull” Garlington is a blogger and author, known for his stories of raising highly intelligent (devious) children published on the blog Death by Children. His writing has appeared in the Chicago Tribune, Another Realm, Bathhouse, The Dead Mule School of Southern Literature and more. Together Haynes and Garlington have hosted the radio program The Dave & Chris Show! since 2007, during which they cultivate and maintain a long-standing argument about…everything. From politics and video games to the importance of cool nicknames and secret societies, they cover it on their live weekly broadcast from cigar stores, bars, and other manly locales around Chicago. Their show first aired on WJJG and is now broadcast online on blogtalk radio.

The book retails at $15.95 and includes $34 in coupons. It’s like being buddies with your alderman. For more info: lakeclaremont.com 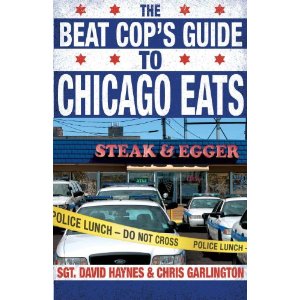 Tags: The Beat Cop's Guide to Chicago.
Logging In...