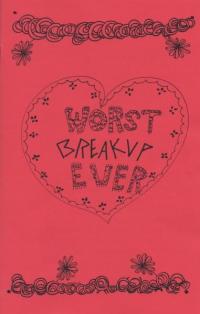 Published by Self-Publishers of Chicago (SPOC)

Compzine all about the demise of relationships from the folks of Self-Publishers of Chicago (SPOC). Contains tales of woe ranging from post-coital fish attacks, school dance dumps, ill-timed apartment leases and the urban phenomenon of "ghosting". If you've ever dropped a zero for not loving your favorite late '90s Keanu Reaves movie, this zine is for you.  This dose of catharsis goes well with a box of chocolates and a middle finger for that ex that you just can't shake. Comics, essays, haikus, illustrations and more all with plenty of high school notebook style scrawlings.

Caboose #9 Masons On Masons How to Start a Secret Society

by Liz Mason and Joe Mason

Prizes Things My Dad Has Had to Take Out of Animals

Urgency of Awesome: How Much Else You Could Be Doing: A Pressing Concerns Book Mark