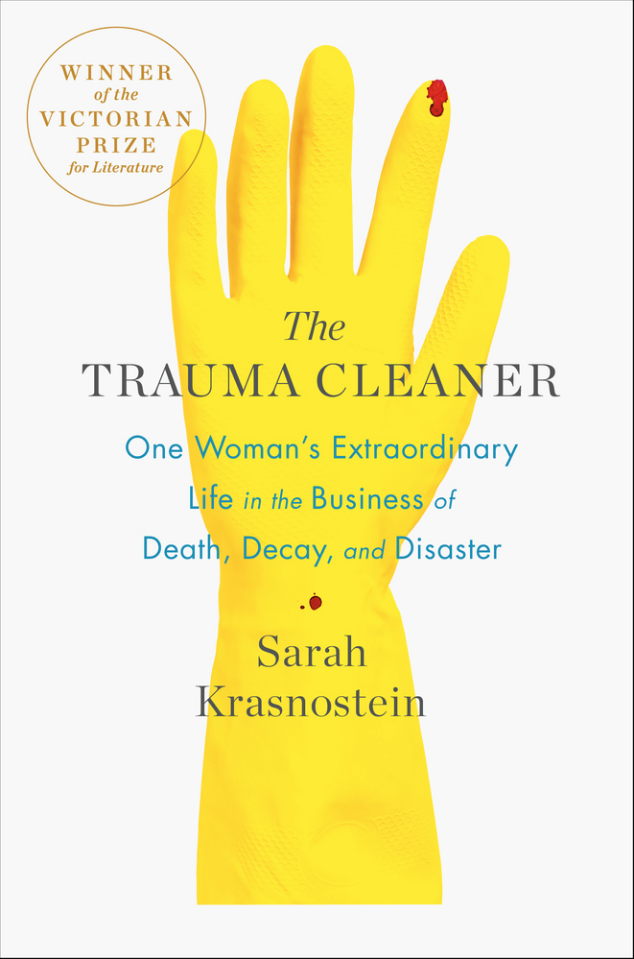 The Trauma Cleaner: One Woman’s Extraordinary Life in the Business of Death, Decay, and Disaster by Sarah Krasnostein $26.99 – Remember Harvey Keitel in Pulp Fiction? Pankhurst is like that. But before she was a trauma cleaner, Sandra Pankhurst was many things: husband and father, drag queen, gender reassignment patient, sex worker, small businesswoman, trophy wife. . . But as a little boy, raised in violence and excluded from the family home, she just wanted to belong. Now she believes her clients deserve no less. A woman who sleeps among garbage she has not put out for forty years. A man who bled quietly to death in his living room. A woman who lives with rats, random debris and terrified delusion. The still life of a home vacated by accidental overdose.

Awesome Things #2 by Liz Mason $3 – A continuation of the list all things awesome: Einstein-Rosen bridges, loop libraries, nudging the cat’s belly so it pendulum swings, or co-worker quotes like, “That guy seems like a warlock. Not like a cool warlock. Like an alcoholic warlock.”

Rick Astley Zine by Allison Felus $3 – Allison decontructs “Never Gonna Give You Up” and the Stock Aitken Waterman production team behind a few of Astley’s hits, and includes a testament in personal defense of his oeuvre (for the first two albums anyway). Rickroll this zine into your life. You had to know someone was going to make that joke, right? -LM

Moonlight by Cole Johnson $5 – Delicious fragments and tidbits of an artist’s life, or anyone’s life really. Each strip possesses a magical, pensive nostalgia full of familiarity and mystery all at once. It’s easy to get swept away in the dreamlike narratives Johnson weaves for us. ~CH

Revolution Channel #1 Towers on the Moon by Erik Thompson $10

The Art of Edena by Moebius (Dark Horse) $34.99 – A companion to the World of Edena graphic novel, this collects four fantastic Edena-related short stories and a motherlode of Moebius illustrations.

The Hookah Girl: And Other True Stories by Marguerite Dabaie (Rosarium Publishing) $6.95 – Semi-autobio of a childhood as a Christian Palestinian in America.

Forward by Lisa Maas (Arsenal Pulp) $18.95 – Two women, both of whom are unable to move “forward” and put the pieces of their lives back together.

The Bridge: How the Roeblings Connected Brooklyn to New York by Peter J. Tomasi $24.99 – Would you jump off a bridge if we told you to? Perhaps the Brooklyn Bridge? Would you buy this book about the making of it?

May Made Me: An Oral History of the 1968 Uprising in France by Mitchell Abidor (AK Press) $20

How to Swear: An Illustrated Guide by Stephen Wildish $14.95 – Fuck yeah! This visual guide to this fine art employs quick-read charts, diagrams, explications and strategies while offering guidance, history and etymology, quips, insults, answers to lingering questions, and much more.

The Disco Days Trilogy books by by David F. Ross – Adventures about music in Scotland in the 80s and 90s.

McSweeney’s 52: In Their Faces a Landmark: Stories of Movement and Displacement edited by Nyuol Lueth Tong $26