We send out a monthly newsletter with all things Quimby’s that you need to be on top of. Read the March issue here or click on the image below. 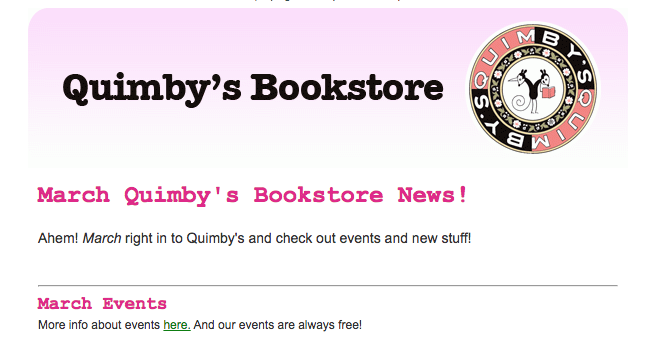 Sign up for it here to come to your inbox monthly.

Don’t miss our monthly newsletter! If you sign up at quimbys.com to get it. it will come straight to your inbox with Quimby’s announcements, store event listings, a list of noteworthy new items etc. Wanna see our February newsletter ? Click on the image below!

UPDATE: C.T. Ballentine has been found. At 2:30 PM family members said a “disoriented and tired” Ballentine had turned up in an area hospital. They thank everyone for their help and support. Additional updates will be posted on the Facebook page. Tonight’s event at the Whistler has been canceled.

CT Ballentine is an important part of the Chicago literary and zinester community, and has been selling his zines for the last five years (at least). Please — if you have any information, or could pass this information on to you and yours, it will be enormously appreciated.

To Whom It May Concern:

We are asking people all over Chicago to help find a missing friend.

You may know C.T. Ballentine, a very talented artist who lives in the McKinley Park neighborhood of Chicago. He has been missing since Friday, and all of his friends are worried about him.

He’s been going through some difficult times, and has recently shaved his head. As you can read in the attached email, he is a writer, sound engineer, performer and active member of the Chicago’s young artist community.

We would appreciate it if you could read this, and help us put it into as many hands as possible.

If you have any questions, please feel free to call Eric Graf. His number is at the top of the flyer.

Thank you in advance for your help.

PLEASE READ THIS AND KEEP AN EYE OUT FOR C.T. BALLENTINE OF CHICAGO. HE IS MISSING, AND WE ARE WORRIED ABOUT HIM.

He was last seeing wearing dark cut off pants over sweatpants and a jean jacket. He has recently shaved his head.

There is a Missing Persons Report with the Chicago Police. If you have any information on his location please call 9-1-1 immediately. You can ask for confidentiality, if you want.

Christian “C.T.” Ballentine was last seen at his apartment in McKinley Park on Chicago’s South Side Friday, Nov. 6, at 3 p.m.

Ballentine was born in Kentucky in 1982, but came to Chicago in 1993 when his father became pastor at St. Philittus Church of Christ in the McKinley Park neighborhood of Chicago. He went on to graduate from Schaumburg High School in 2001, subsequently attending Elmhurt College and Northeast Illinois University. Ballentine has most recently been an active member of the Chicago literary community, coediting THE2NDHAND literary broadsheet and online magazine and publishing his work there and in a host of other venues. Recently, the Orange Alert reading series featured a piece of Ballentine’s that may be found here: http://www.orangealert.net/node/411

In addition to his literary work, Ballentine is also considered a very knowledgable member of the Chicago music scene and has been working as a sound engineer, producer, and music critic for many years. He worked as a sound engineer at the music venue Ronnie’s in Logan Square and most recently at the Whistler and elsewhere. He was interviewed for a presentation on underground music and the strong community that builds up around basement shows given by Tobias Caroll at the esteemed Experience Music Project’s annual Pop Conference in Seattle, and the paper presented can be found here: http://www.yourbestguess.com/scowl/from-a-basement-show-on-a-hill/

Ballentine has likewise reviewed and profiled numerous bands from across the musical spectrum and written feature articles on a broad assortment of topics. Ballentine is an editor for THE2NDHAND, a national literary concern founded in Chicago whose website can be found at www.THE2NDHAND.com. Several literary journals have published Ballentine’s fictional work. Ballentine was the founder and publisher of now defunct Aftercrossword Special, a literary zine hilighting both fiction and art.

He was last seen at his apartment in McKinley Park on Chicago’s South Side Friday, Nov. 6, around 3 p.m. He was preparing for the launch of a new performance series to be held at The Whistler entitled “So You Think You’ve Got Nerves of Steel” to launch this Monday, November 9th at 8 p.m. and to occur on the second Monday of every month. The series will feature some of Chicago’s best writers and performers. All proceeds from the series will go to benefit a budding music program for underpriveleged south-side youth. Event release can be found here: http://www.the2ndhand.com/events/events.html The Facebook page for the series is here: http://www.facebook.com/group.php?gid=91560755721&ref=nf

Ballentine has organized and hosted many events, including a handful of THE2NDHAND readings. Images from one of those events in 2007 can be seen here:

Balentine also recently finished production on an album by the band ‘Plan B’ and was very happy about the results of these recording and production sessions. The band’s MySpace page contains some of their older work and can be found here: http://www.myspace.com/planband

Cup & String (http://www.myspace.com/cupnstring) and 1997 among many others.

Ballentine plays guitar, banjo, harmonica and can be seen performing here with 1997 at Ronny’s in Logan Square: http://www.youtube.com/user/calebpepp#p/u/1/EwHtaL04e3w

Shout-outs to a few of the books and events which shaded my glassy eyes throughout 2007.
Novel of Roy Orbison In Cling-film, by Ulrich Haarbürste (Serapion Books)

I can totally see this book at home in some ruined castle in Lacoste.. Or Master Shake reading it in an episode of Aqua Teen Hunger Force. Either way, books such as Roy Orbison Wrapped In Cling-film are the reason why Quimby’s Bookstore is so great in the first place. Ja und was sonst?