Patton Oswalt! Not at Quimby’s, But at Reckless Records 3/18 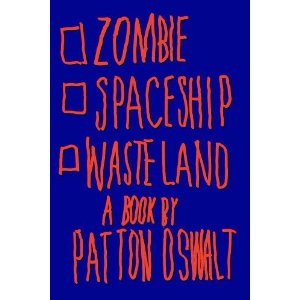 Comedian Patton Oswalt will be signing his book Zombie Spaceship Wasteland at the Reckless Records in Wicker Park! And we’ll be there at Reckless too, selling it, as well as an unabridged audio CD version of the book. Of course Reckless will be selling other Patton Oswalt CDs to complete your collection.

Reckless Records is at 1532 N Milwaukee Ave, just a 5 minute walk from Quimby’s.

Yes! This event has been updated! It is now, in fact, March 18th at 3:30pm, coincidentally rescheduled to coincide with the C2E2 comics convention. Come to Chicago for the comics. Stay for the Patton.

Prepare yourself for a journey through the world of Patton Oswalt, one of the most creative, insightful, and hysterical voices on the entertain­ment scene today. Widely known for his roles in the films Big Fan and Ratatouille, as well as the television hit The King of Queens, Patton Oswalt—a staple of Comedy Central—has been amusing audiences for decades. Now, with Zombie Spaceship Wasteland, he offers a fascinating look into his most unusual, and lovable, mindscape.

Oswalt combines memoir with uproarious humor, from snow forts to Dungeons & Dragons to gifts from Grandma that had to be explained. He remem­bers his teen summers spent working in a movie Cineplex and his early years doing stand-up. Readers are also treated to several graphic elements, includ­ing a vampire tale for the rest of us and some greeting cards with a special touch. Then there’s the book’s centerpiece, which posits that before all young creative minds have anything to write about, they will home in on one of three story lines: zom­bies, spaceships, or wastelands.

Oswalt chose wastelands, and ever since he has been mining our society’s wasteland for perversion and excess, pop culture and fatty foods, indie rock and single-malt scotch. Zombie Spaceship Wasteland is an inventive account of the evolution of Patton Oswalt’s wildly insightful worldview, sure to indulge his legion of fans and lure many new admirers to his very entertaining “wasteland.”

This event is NOT at Quimby’s. It is at Reckless Records at 1532 N Milwaukee Ave, just a 5 minute walk from Quimby’s.