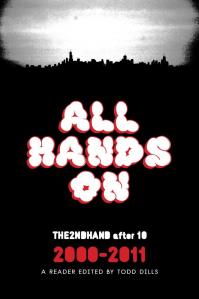 So You Think You Have Nerves of Steel? Series Launch

The first in what will be a regular monthly lit series from the folks at THE2NDHAND (the2ndhand.com), wherein one featured writer a month riffs on the question in the reading’s title in whatever manner he or she deems appropriate. For this first installment, both THE2NDHAND and Chicago-performance-scene stalwarts Chris Bower and Jill Summers will be riffing with nerves of steel. They’ll be joined by the event’s host janitor Harold Ray (aka ACM fiction editor and THE2NDHAND coeditor Jacob Knabb), Requited Journal managing editor Amanda Marbais and a new issue of broadsheet.

ABOUT THE FEATURED READERS: Chris Bower has recently seen staging of several of his dramas, including the one-act Notes to Molly at SAIC and Little Boy Needs Ride as part of the Happy Family series at Viaduct Theater. He is one of the founders of the occasional Ray’s Tap reading series and has performed widely in Chicago and elsewhere. About Notes to Molly, part of a program of three one-acts, the Chicago Theater blog had this to say, “Bower deals the most devastating realism of all these pieces. Based on his short story by the same name, the play etches an indelible portrait of a dead-end alcoholic couple and the psychological forces that barely keep them hanging on, to themselves and to life. It is an intensely realized work…” THE2NDHAND repeat performer and writer Jill Summers’ audio fiction has been featured on Chicago Public Radio, via the Third Coast International Audio Festival, and with New Adventures in Sound Art. Her work has appeared in many magazines, and she’s authored three collections of audio shorts She was Chicago’s reigning Opium magazine Literary Death Match Champ from 5/23/09 – 7/31/09, whereupon THE2NDHAND’s entry in the LDM held at the 2009 Chicago Printers Ball, Spencer Dew, took the crown.

We convene for the release of the 30th installment of THE2NDHAND’s broadsheet series, marking the magazine’s ninth anniversary and eighth year of hosting Quimby’s events, coincidentally, for which opportunity we are always grateful, if not quite gracious in our gratefulness at all time. Yes, there were pork chops involved, unfortunately, at one time.

THE2NDHAND No. 30 features the “Gives Birth to Monsters” short by Spencer Dew, a tale of one man’s small heartbreak, the backdrop to a contemporary landscape of well-meaning but ultimately shallow political activism, fractured communicative lines, and more ultimately enduring drives toward total inebriation. In classic Dew fashion, he’ll have you laughing all the way to brink of the void.

Spencer Dew is the author of the short-story collection Songs of Insurgency (2008) and much else besides — he’s a prolific contributor to many literary venues, including THE2NDHAND’s online magazine, www.the2ndhand.com

Jill Summers’ audio fiction has been featured internationally by Chicago Public Radio, the Third Coast International Audio Festival, and New Adventures in Sound Art. Her work has appeared in Stop Smiling Magazine, Ninth Letter, VAIN magazine, littleBANG, Gapers Block, Annalemma, and The 2nd Hand, where she’s a somewhat frequent contributor. She is the author of three collections of audio shorts, Cohabitation, Les Petites Tristes, and In The Realm of Normal Sized Things.

Y.Z. Chin lives and writes in Chicago, is a former editor with Rhino Magazine and studied writing at Northwestern University.

C.T. Ballentine studied down on Iron St. under the tutelage of Nova Capone, or Eric Graf, as he is sometimes known. His acumen, in so many respects, is world renowned.