Off-Site Event: Like a Secondhand Sea: A story of the River and Lake told in 3 Parts 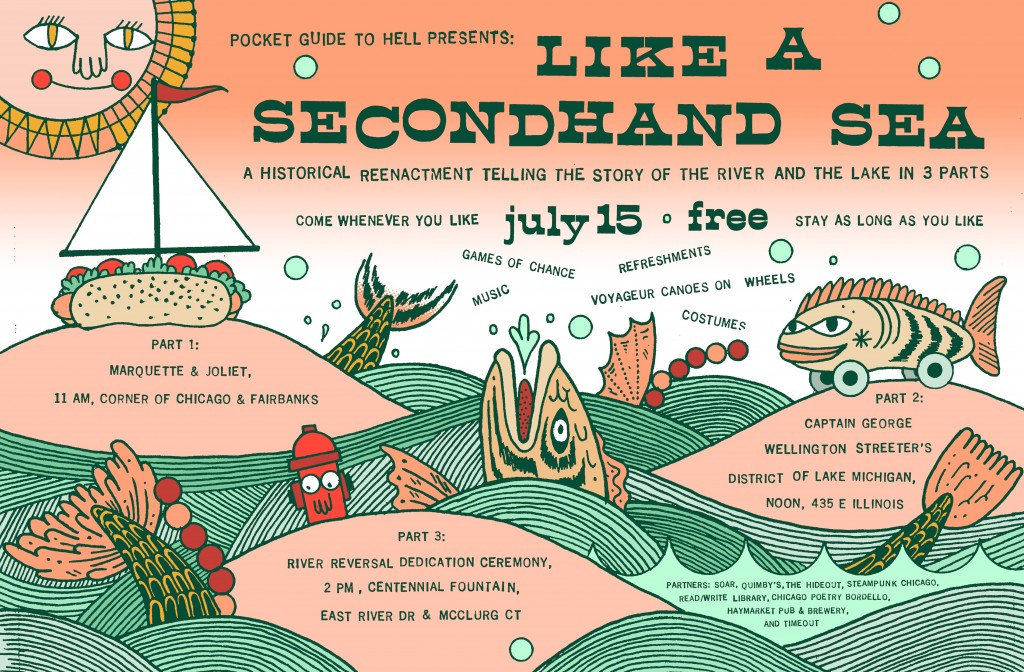 Pocket Guide to Hell presents Like a Secondhand Sea, a 3-part historical reenactment that uses costumes, props, and audience participation to tell the story of how human contact has altered Lake Michigan and the Chicago River on Sunday, July 15th. Using costumes, props, music, and a cast of hundreds, it tells a three-part story: Marquette and Joliet’s expedition along the original coastline of the Lake in 1673; Captain George Wellington Streeter’s founding of a squatter community on the reclaimed land that bears his name in 1886; and the Sanitary District’s reversal of the Chicago River in 1892-1900. This free and interactive event uses stories of the past to increase awareness of how human contact is continuing to change the waterways today. It’s FREE. Come whenever you want. Stay as long as you like. THIS EVENT IS NOT AT QUIMBY’S.

In Part 1 join Marquette & Joliet as they retrace the original coastline of the lake, today’s Michigan Avenue, in voyageur canoes on wheels. Part 2 brings to life the District of Lake Michigan, aka Streeterville, the outlaw and outcast community of gambling dens, saloons, and brothels that Capt. George Wellington Streeter built on land reclaimed from the lake. The Sanitary and Shipping Canal is dedicated and the Chicago River is reversed in Part 3, which restages the official ceremony inaugurating this marvel of engineering, complete with nickel-plated shovels and a marching band. Each Part leads directly into the next and will be used to highlight contemporary challenges to the health and sustainability of Chicago’s waterways.

Pocket Guide to Hell is a series of free and interactive walking tours and historical reenactments dealing with Chicago’s past. Last spring’s full-scale 125th anniversary Haymarket Reenactment had over 1000 participants. Pocket Guide to Hell has been written about in the New York Times, the Huffington Post, TimeOut, and Vice among other places. See pocketguidetohell.com for information about past and upcoming events.

Tags: Like a Secondhand Sea, Pocket Guide to Hell.
Logging In...