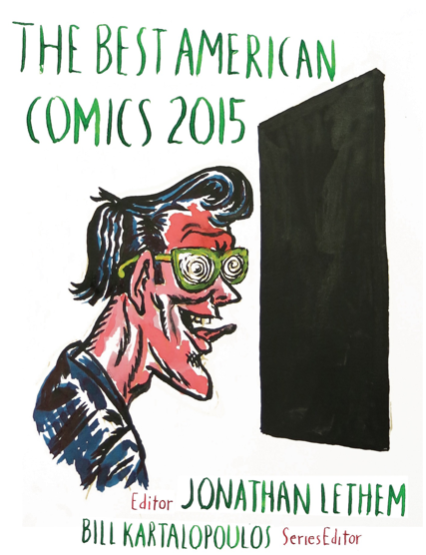 Now in its tenth year, THE BEST AMERICAN COMICS 2015 (Houghton Mifflin Harcourt), guest edited by Jonathan Lethem with series editor Bill Kartalopoulos, showcases the work of both established and up-and-coming contributors, and pulls from graphic novels, pamphlet comics, newspapers, magazines, minicomics, and the Web to create a unique and stunning collection. This year’s edition is a stirring journey into the world of comics, featuring pieces by Chicago contributors Gina Wynbrandt and Anya Davidson. Yes, you can preorder Best American Comics 2015 from Quimazon!

BILL KARTALOPOULOS is a Brooklyn-based comics critic, educator, curator, and editor. He teaches comics history at the School of Visual Arts. More information may be found at on-panel.com.

GINA WYNBRANDT was born in Chicago in 1990. She writes comics about personal humiliations, sexual disappointment, and popular culture. Her favorite food is ice cream. www.ginawynbrandt.com

ANYA DAVIDSON was born in Sarasota, Florida, in 1983. She graduated with a BFA from the School of the Art Institute of Chicago in 2004. She is a cartoonist, musician, teaching artist, and printmaker whose work appeared in many ‘zines and anthologies, including Kramers Ergot, before her debut graphic novel, School Spirits, was published by PictureBox Inc. Her current project, the Ignatz Award-nominated comic Band for Life, will be available in print from Fantagraphics Books in the not-too-distant future. She lives and shreds in Chicago. www.anyadavidson.com

“As I know well from my own field, true vitality consists of stuff that’s further off the radar of general acclaim. The influx of raw arrivals. The deep cuts.” —Jonathan Lethem, from the Introduction

Facebook invite for this event to tell the world you’re coming and invite people.

Preordering this book from Quimazon.

This event is on Friday, October 16th, 7pm at Quimby’s!

A word from Jessica Abel and Matt Madden, the series editors of The Best American Comics for comics artists and publishers!

This is a note to remind you that we are, as always, collecting submissions for the Best American Comics. Great stuff comes out all year round and we want to get our hands on it as soon as possible. In addition, it makes our guest editors’ jobs much more manageable if we can supply them with a large batch of excellent booty by mid-summer.

So please submit your books published since September 1 of 2011 for Best American Comics 2013. If you don’t publish books, we’ve put you on our reminder list because we know you know people who do, and we hope you’ll pass on this reminder to them. Especially when it comics to minis, webcomics, and very small press, we need your help to make sure we’re seeing what’s great out there in the comics world.

How to submit:
Mail one copy of each of your books to us at the address below. Please make sure to attach your contact information and the RELEASE DATE. If it’s not inside the book, stick a post-it on the cover with that info.

For more details on the submissions process and rules, look here: http://www.hmhbooks.com/bestamerican/comics/contacts.html

BAC11, under guest editor Alison Bechdel, has been one of our most popular volumes yet and I’m pleased to be able to announce to you “officially” the the guest editor for BAC12 is none other than Françoise Mouly! (As for BAC13, you’ll just have to wait and see…)

Looking ahead, Jessica and Matt will both be at MoCCA Fest  and will have a table where you can drop books off if you don’t see us walking the floor. Matt will also be at TCAF the following weekend. We look forward to seeing you.

thanks and get in touch if you have any questions, 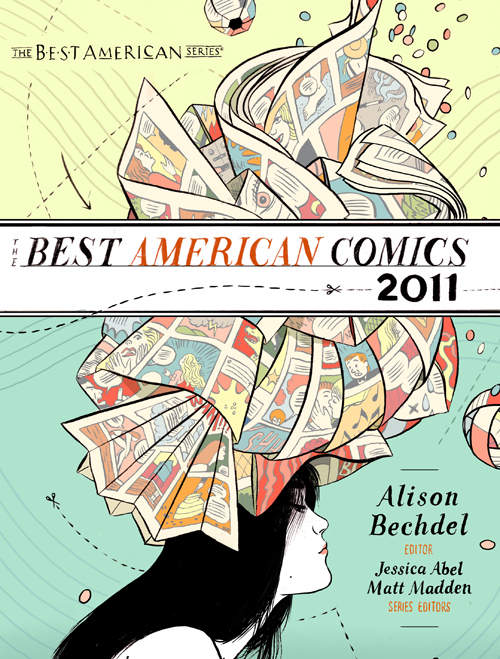 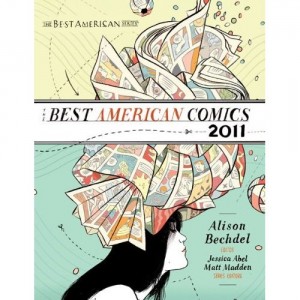 It is widely acknowledge that comics is, by and large, a printed medium, and in the foreword of THE BEST AMERICAN COMICS 2011, series editors Jessica Abel and Matt Madden trace the evolutionary print trends of this art form – from Sunday pages and daily strips to fanzines and minicomics to a mail art movement and self-publishing faction.  However, they also recognize that comics have invaded the digital medium, and many of the aforementioned DIY-ers have created a webcomics scene that parallels, yet doesn’t necessarily intersect with, the print world.  In part as a reflection of this new trend, this year’s volume of THE BEST AMERICAN COMICS features a first for this series: Kate Beaton’s clever, buzz-worthy, and hilarious Hark! A Vagrant, the first included comic by an artist who emerged entirely from the webcomics scene.

Star guest editor Alison Bechdel, author of the seminal chronicle of lesbian lives and loves, Dykes To Watch Out For, and the highly-acclaimed graphic memoir Fun Home: A Family Tragicomic, continues this reflection on comics trends in her introduction.  Though she originally became a cartoonist because of its alternative, underground nature far from mainstream literary and art criticism, she acknowledges – and appreciates – the incredible growth spurt and popularity boost comics have undergone in the past decade.

Submission after submission, Bechdel writes, shows how cleverly, confidently, and infectiously young comics are playing with the balance of art and language.  Selections like Brendan Leach’s Pterodactyl Hunters about fictionalized 1904 New York, Chris Ware’s Jordan Lint to 65 about the complete, fictionally-realized life of Jordan Lint, and Joe Sacco’s historiography, Footnotes in Gaza don’t fit neatly into a single category.  And yet, many of these pieces address a metacomic theme, commenting on their own art form in some way – David Lasky’s cheeky send-up of recent trends in the ‘graphic novel’ phenomenon and Joey Allison Sayers’ Pet Cat, which investigates the negative qualities defining the more commercial reaches of the comicsphere.

And although Bechdel questions why there’s still such a gender disparity in the field, she also lauds the fact that female cartoonists are beginning to experience a form of freedom that she hopes will extend to the art form as a whole.  “Freedom from having to explain or defend ourselves.  Freedom from being confined to one section of the bookstore.  Even freedom—one day, maybe—from books like this one.”  And it is this liberation, this ability to “look just a little beyond the horizon” that truly defines each of the pieces in THE BEST AMERICAN COMICS™ 2011 which begins, appropriately, with Gabrielle Bell’s heartfelt Manifestation.

Allison Bechdel began drawing the comic strip Dykes to Watch Out For in 1983.  Dykes was syndicated in fifty alternative newspapers, translated into multiple languages, and collected into a book series with over a quarter of a million copies in print. Bechdel is also the author of the best-selling graphic memoir Fun Home: A Family Tragicomic, which was named a Best Book of the Year by Time, Entertainment Weekly, the New York Times, People, USA Today, the Los Angeles Times, the Village Voice, and the San Francisco Chronicle, among others.  Her new graphic memoir, Are You My Mother?: A Comic Drama, will be published by Houghton Mifflin Harcourt in April 2012.