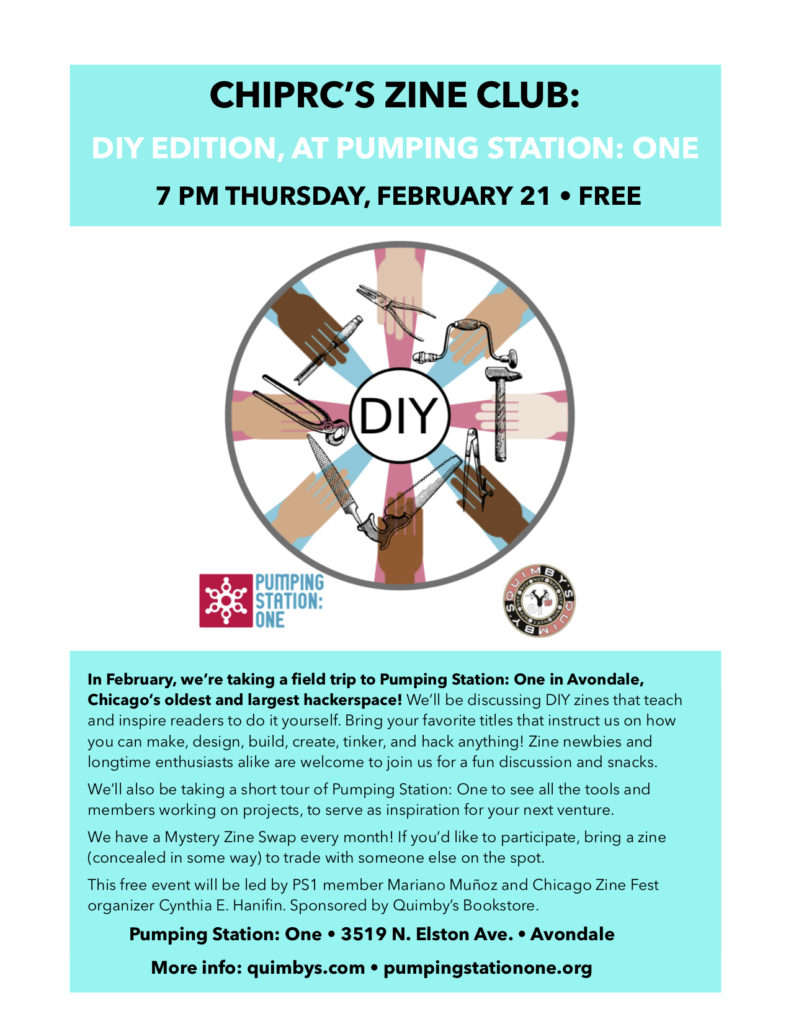 THIS MONTH’S ZINE CLUB MEETING IS AT A SPECIAL LOCATION, NOT AT QUIMBY’S! It’s at Pumping Station: One is at 3519 N. Elston Ave.

This February, Zine Club takes a field trip to Pumping Station: One in Avondale, Chicago’s oldest and largest hackerspace!

We’ll be discussing DIY zines that teach and inspire readers to do it yourself. Bring your favorite titles that instruct us on how you can make, design, build, create, tinker, and hack anything! Zine newbies and longtime enthusiasts alike are welcome to join us for a fun discussion and snacks.

We’ll also be taking a short tour of Pumping Station: One to see all the tools and members working on projects, to serve as inspiration for your next venture.

We have a Mystery Zine Swap every month! If you’d like to participate, bring a zine (concealed in some way) to trade with someone else on the spot.

If you’re planning to attend, you’ll need to digitally sign Pumping Station: One’s waiver either in advance or when you arrive at the hackerspace: bit.ly/2IWwdV5 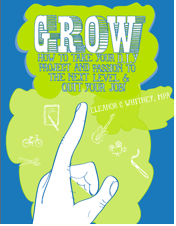 Eleanor C. Whitney’s new book Grow: How to Take Your Do It Yourself Project and Passion to the Next Level and Quit Your Job (Microcosm Publishing), is a practical field guide for creative people who want to achieve success with their ideas for independent projects.  Author Eleanor Whitney enables readers to clarify their vision, set goals, create a plan, fundraise, publicize, and manage their “do-it-yourself” endeavor. Whitney will discuss achieving success and sustainability as an independent writer, publisher and creative business owner with Chicago-based creatives Selena Fragassi (Boxx Magazine), Rebecca Ann Rakstad (Rarrar Press), and Bradley Adita (PopPunk.com).

“The ultimate creative person’s companion- for anyone who’s thought of, attempted to, or has already made some steps to turning their vision into a  viable product, this practical and personal how-to is like a business-savvy mentor.” – Cathy Erway, author of The Art of Eating In: How I learned to Stop Spending and Love the Stove and editor of Not Eating Out in New York

Eleanor Whitney is a Brooklyn-based writer, musician and arts professional. She has written for publications such as Venus Zine and Remedy Quarterly and contributes regularly to Idealist.org and Artsfwd.org. She has spoken about creative success and sustainability at national conferences such as South by Southwest and the Creative Chicago Expo.

Microcosm Publishing is heading out on tour! This time around we’re sending some of our authors and artists to teach you a little somethin’ (and hopefully entertain you in the meantime!) First off, though in no particular lineup order, Do-It-Yourself Screenprinting author John Isaacson will show you the ins and outs of turning your bedroom into a full-on DIY t-shirt factory. Says his tour-mate and Microcosm founder Joe Biel, “If there were awards for niceness, John would be in the top three. He teaches writing programs when he’s not busy teaching silkscreening workshops. He’ll be bringing his skills and knowledge to your town and showing even the experts a thing or two.”

Then we got Moe Bowstern, author of the extra rad zine series Xtra Tuf, who will show you some sailors’ knots and teach you a few sea chanteys. Moe’s zines tell the story of her life as a woman in the male-dominated commercial fishing industry and are high adventure no matter how you shake it. She’s also a real sweetheart!

Next there’s Microcosm founder Joe Biel who will screen his latest documentary If It Ain’t Cheap, It Ain’t Punk: 14 Years of Plan It X. You may know Joe from the celebrated zine Perfect Mixtape Segue, of which his latest issue just came out. Joe is also the co-author of the recently released zine-making how-to book Make a Zine and the dude who brought you the excellent zine-makin’ “talk-umentary” $100 and a T-Shirt. He’s a great guy and wears a lot of green and orange.

Also on the lineup we got Shelley Jackson, co-author of the Chainbreaker book and zine. Joe Biel had the following to say about the wonderful Miss Jackson: “The first time I visited New Orleans, I knew no one except for a polite GK Darby who kept insisting that I should come. Shelley offered to put up two strangers in her cute little shotgun home and we became closer over years. She’s been a bike mechanic for longer than I’ve known her and wrote down her thoughts on the matter with her friend Ethan in her Chainbreaker book. She’s going to teach you how to fix yer bike.”

Last but not least–or, really, last–the incredibly awesome traveling vegan chef Joshua Ploeg will prepare some mind-blowing cuisine from his hot-off-the-press debut cookbook In Search of the Lost Taste. Joshua is also known as Joshua Plague, member of such kick-ass punk bands as Behead the Prophet, the Mulketeo Fairies, and, his latest outfit, Warm Springs. You haven’t lived until you’ve had Joshua’s cooking, for reals!

Come on down and hang out with us!