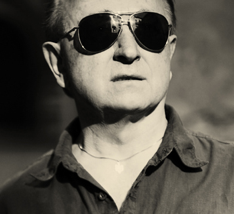 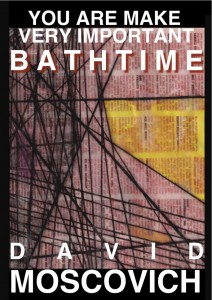 David Moscovich’s new book, You Are Make Very Important Bathtime (JEF Books Publishing), is about an expatriate in a foreign land and his failure to navigate the awkward seas of extreme culture clash. Set in Southern Japan, it is a celebration of the beauty of misunderstanding and the inadvertent poetry of bad grammar.

“A wild and enlivening collection of stories that capture the comedy, chaos and uncertainty of living as an alien in a place just beyond one’s understanding. Moscovich is a daring writer, and this book, both preposterous and beautiful, is an unusual demonstration of talent.”

David Moscovich writes flash fiction and performs his texts both live and on the radio, fragmenting, ricocheting, and refurnishing language until it meets its own devolution. He lives with chronic insomnia in New York City and runs Louffa Press, a micro-press dedicated to printing innovative fiction.

Also reading: novelist Eckhard Gerdes read from his first published book of poetry, 23 Skidoo! 23 Form-Fitting Poems (Finishing Line Press) and from his short novella The Sylvia Plath Cookbook (published by Sugar Glider Press in Queensland, Australia).  Eckhard Gerdes is the author of 14 published novels, including My Landlady the Lobotomist and Hugh Moore.  He lives in Geneva, Illinois, and is the publisher of the Journal of Experimental Fiction and JEF Books. 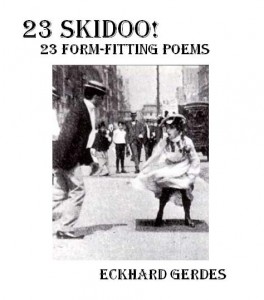 Light refreshments will be served

Brion Poloncic’s novel Xanthous Mermaid Mechanics pushes at all of our preconceptions and misconceptions not only about the self, but also about art.  Artists are too often and too easily cast as outsiders, and Outsider Art has become somewhat of a commodity with so-called “outsiders” who seem to market their “outsidedness” for monetary gain.  One wonders if in some cases the outsider stance isn’t merely a con.  But with Poloncic, who has been called the “Daniel Johnston” of literature, we see the real thing, and it is beautiful and scary, marvelous and delightful, yet also angry, insecure, self-doubting.  In other words, this is as human as it gets.  And sometimes it as humorous as it gets as when, in the depths of his artistic quest, Poloncic begins channeling William S. Burroughs, who dictates a manuscript to him, or when he realizes that all we really need to get through our lives successfully is a sequence of form letters.  Although it is deliciously funny, the book is, simply put, both charming and discombobulating, which is a note that rings absolutely true to the ear.  Brion Polonic is also an accomplished artist and musician.  He lives in Omaha, Nebraska, with his dog Tinca.

“This book was a very interesting read. At times, the author goes on a road that I don’t follow, but above and beyond, the first person narrative is brilliant. Dealing with mental illness, drug abuse and some very bad behavior without making excuses or apologies, this book chronicles parts of the author’s psyche that most of us keep locked away. My personal favorite was ‘Schizophrenia 101’. It is a step by step guide for “new” schizophrenics. Though written with humor, one can’t help but wonder if the advice and detailed guide of symptoms and meanings WOULD be a useful tool for people experiencing their first psychotic episode.”   –Kyle Muntz, Author of VII (A Novel): The Life, Times, and Tragedy of Sir Edward William Locke the Third: Gentleman.