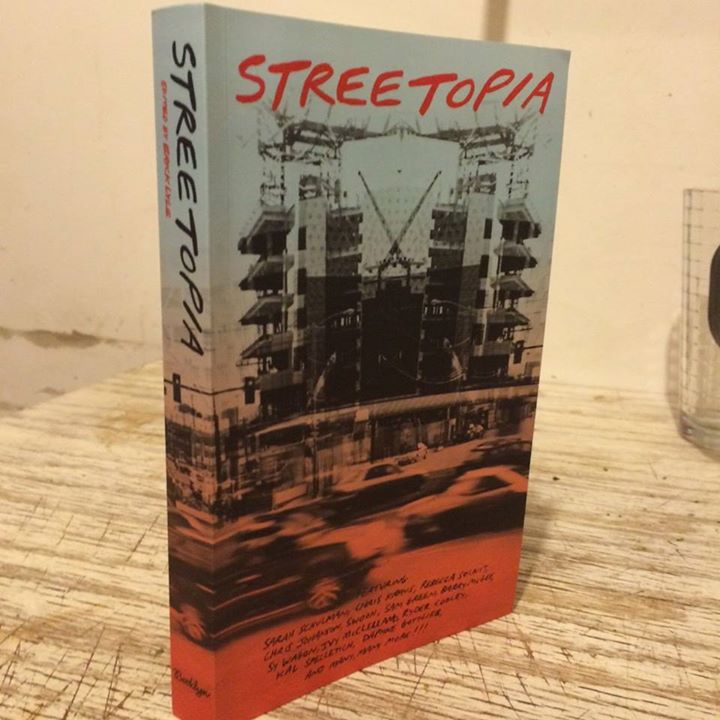 After San Francisco’s new mayor announced imminent plans to “clean up” downtown with a new corporate “dot com corridor” and arts district–featuring the new headquarters of Twitter and Burning Man–curators Erick Lyle and Chris Johanson brought over 100 artists and activists together with residents fearing displacement to consider utopian aspirations and plot alternative futures for the city. The resulting exhibition, Streetopia, was a massive anti-gentrification art fair that took place in venues throughout the city, featuring daily free talks, performances, skillshares and a free community kitchen out of the gallery. This book brings together all of the art and ephemera from the now-legendary show, featuring work by Swoon, Barry McGee, Emory Douglas, Monica Canilao, Rigo 23, Xara Thustra, Ryder Cooley and many more. Join Lyle to consider the effectiveness of Streetopia‘s projects while offering a deeper rumination on the continuing search for community in today’s increasingly homogenous and gentrified cities.

“Streetopia’s projects were futuristic, idealistic, historically sensitive, and surprisingly practical. They offer enough ideas to keep anyone who cares about public life, culture, and art busy for the next decade.” –Chris Kraus, author of I Love Dick, and Where Art Belongs

“Streetopia is a squat, dense little brick of a book, loaded with colorful photographs and reproductions of documents from the exhibition…Reading Streetopia will prepare you to think about what such an exhibition would entail, and why it’s so necessary.” — Seattle Review of Books

Erick Lyle is a writer, curator, musician, and underground journalist. His work has appeared in Art in America, Vice, California Sunday Magazine, Huck, LA Weekly, Brooklyn Rail, the San Francisco Bay Guardian and on NPR’s This American Life. Since 1991, he has written, edited, and published the influential punk/activist/art/crime magazine, SCAM. More info: onthelowerfrequencies.com

“Forget the statistics and pretentious analysis of urban society. Take a walk through the city with Erick Lyle and discover the reality of how people live in an American city.” — Howard Zinn

Join Erick Lyle as he reads from his new book On the Lower Frequencies: A Secret History of The City.

On the Lower Frequencies is at once a manual, memoir, and history of creative resistance in a world awash with war and poverty.  With these tales of squatting the ruins of the dot-com era, playing hit-and-run punk shows in the streets and organizing neighborhood anti-war parades, the editor of the underground classic SCAM magazine, Erick Lyle, traces not only the evolution of cities, but of his own thinking — and in so doing, gives the reader inspiration for living defiantly.

Erick Lyle, once upon a time known as Iggy Scam, has been editing SCAM magazine and traveling around the nation in various bands since 1991.  Lyle will be playing in Chicago a few days before with his band BLACK RAINBOW at the Mauled By Tigers fest.