Pete Jordan Reads From In the City of Bikes: The Story of the Amsterdam Cyclist 5/5 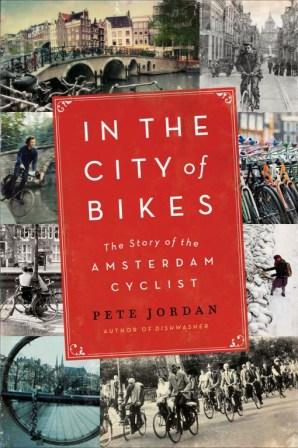 Pete Jordan, author of Dishwasher, tells the story of his love affair with Amsterdam, the city of bikes, all the while unfolding an unknown history of the city’s cycling, from the craze of the 1890s, through the Nazi occupation, to the bike-centric culture adored by the world today.

Part personal memoir, part history of cycling, part fascinating street-level tour of Amsterdam, IN THE CITY OF BIKES: The Story of the Amsterdam Cyclist is the story of a man who loves bicycling in a city that is obsessed with bikes.

When Pete’s story begins, his goals for an upcoming semester abroad are clear: study how to make America’s cities more bicycle friendly, and then return home—simple and straightforward. Once he sets foot in Amsterdam, however, Pete falls immediately in love with the city that already lives life on two wheels—and suddenly, he can’t imagine living anywhere else.

But hardships loom in Pete’s adopted homeland. As Pete skips from one short-term apartment rental to the next, stability stays just out of reach and work is increasingly difficult to find. Meanwhile he stumbles upon unforeseen pleasures in his daily bike rides and begins his dig into the city’s cycling past. What he discovers there is no less an untold cultural history of Amsterdam.

From cycling’s beginning as an elitist pastime in the 1890s to the street-consuming craze of the 1920s, from the bicycle’s role in city-wide resistance to the Nazi occupation to the legendary (yet mythical) success of the White Bikes in the 1960s all the way up to the mysterious bike fishermen of today, in IN THE CITY OF BIKES Jordan illuminates the bicycle’s integral role in shaping both the psyche and city of Amsterdam.

“An excellent choice for bikers and those who appreciate how a city’s history can be changed by the simplest of passions.”

“Part memoir, part history, the book gives readers looking to unlock the city’s secrets an opportunity to follow in the author’s tracks.”

Pete Jordan is the author of the memoir Dishwasher: One Man’s Quest to Wash Dishes in All Fifty States. Pete’s work has been featured on public radio’s “This American Life” and in The New York Times. He lives with his son in Amsterdam.

For more info, download In the City of Bikes Press Release from the publisher.

Tags: Dishwasher Pete, In the City of Bikes The Story of the Amsterdam Cyclist, Pete Jordan.