Meet the Artists of Speculative Relationships at Quimby’s Fri, 10/24 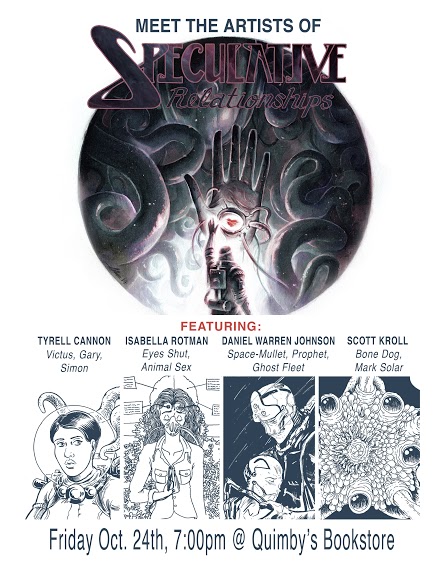 Join the creators behind the recently released sci-fi romance comics anthology Speculative Relationships at Quimby’s on Fri, Oct 24th at 7pm.  The event will feature 4 Chicago comics creators featured in the book:

There will be a presentation by the artists and copies of Speculative Relationships will be available for purchase and signing.

In the mid-twentieth century, romance was the most popular genre in comics. Comic publishers produced dozens of titles throughout the 1950s and 60s, and many of the medium’s top artistic talents such as Jack Kirby, Joe Simon, and Frank Frazetta worked in romance comics. However, by the 1970s, the once-dominant genre of romance comics all but died out.

The eight stories in the anthology include  a cyborg fighting alien hordes for love, a computer AI in love with a sleeping interstellar voyager, two robots that were literally made for each other, and so much more!

The monthly focus on lady comics and friends of lady comics artists returns. Come hear comics creators speak about their work, their process, their plans, and whatever else they want to share with us. For more info: laydeezdocomics.blogspot.com

Though originally from Utah (and no, she’s not Mormon), Sarah now lives in Chicago. She has pursued several various careers, including photojournalism and urban planning, but never stopped drawing. Sarah is currently working on volume 3 of Seasonal, a graphic novel based on the book by Bobbi Parry.  Sarah is also  working on as a series of autobiographical stories based on her aforementioned career experiences, a monthly comic about urban planning, and many, many others. sarahannmorton.com

Tyrell  Olen Cannon is also a Chicago local, and is a graduate of the SAIC. His blog Process Is Everything is a look into his art-making process. He does the comic Gary about a true-crime ispired serial killer.
tyrellcannon.com

Thursday, May 30 at 7pm and the last Thursday of every month