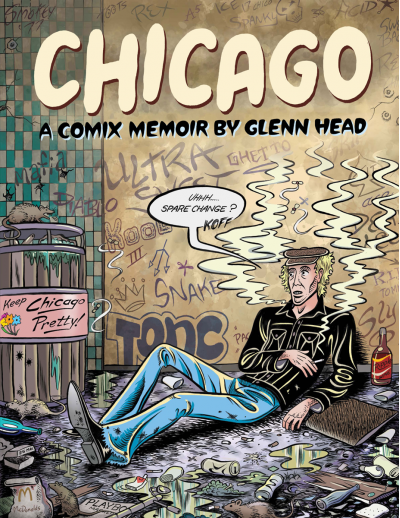 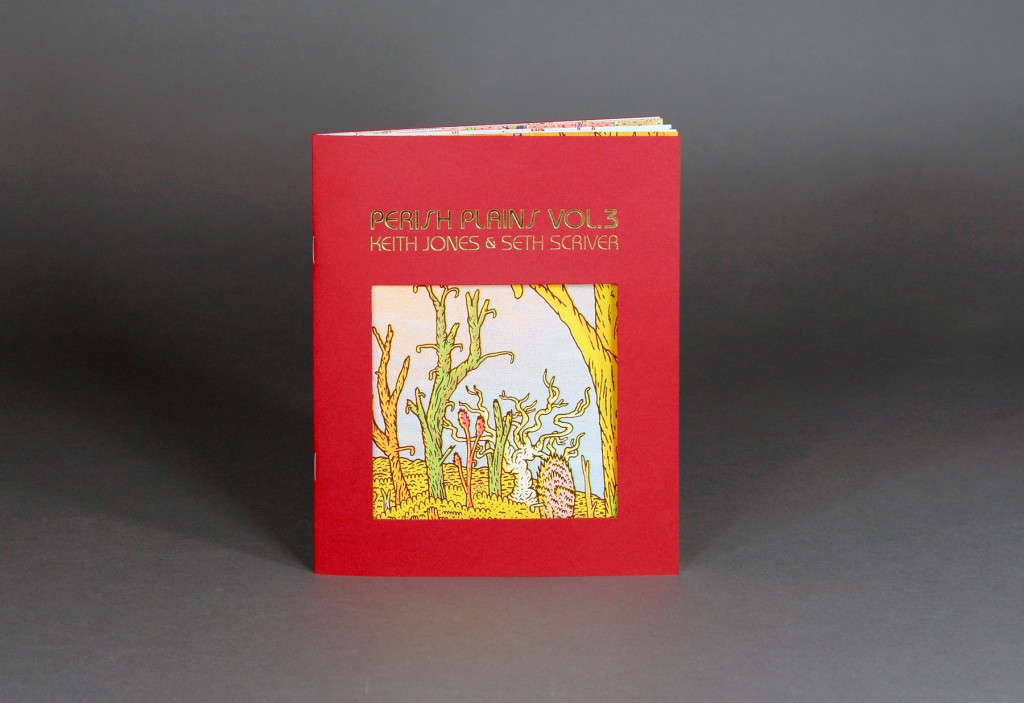 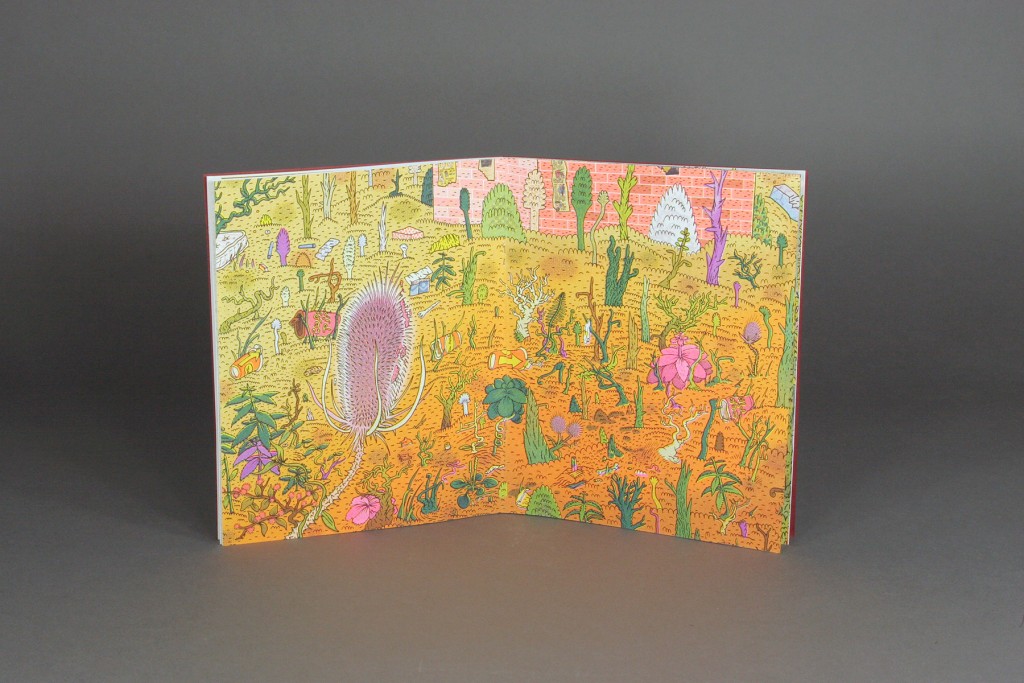 Welcome to the Dessert of the Real! Delivered by hand from Toronto, this gorgeous latest volume of Perish Plains drops you in a post-environment shitscape, spins all your candy into glass, and smokes it up in your favorite childhood meth stem. Wander and get lost, step on a rusty nail, get riso-dot lockjaw, drop your sherbet in the sludge. It’s sundown on a garbage-dump world where the DNA’s all effed and the only constant is decay. Give your highbrow a Brazilian wax and let the dregs carry you downstream with a turd for a paddle. ~GS

Feminist Theory Is for Everybody: A Brief Primer on 6 Feminist Theorists We Should Know by Naomi Powers $3.00

Abstract Door #5 Spr Sum 15 Chicago by Vicky Lim $3.00 – The front doors of this smartly assembled little perzine open up & grant you access into the quiet, diary-like ruminations of a lone rando waiting for a bus. Text, photos, drawings, baby hedgehogs. Like tagging along in Lim’s brain for a few stops! ~GS

Embody: A Zine About Navigating Spaces as A Female Identifying Human by Rosie Accola $3.00

Drawing Blanks In Front of Your Date at a Poetry Slam by Latenitedraw $3.00

Ain’t No Use by Kat Tuesday $8.00 – A story of boy-girl unrequited love in an accordion-fold style reminiscent of the formalistic trapeze acts of Scott McCloud or Jason Shiga — only drawn nicer! Welcome to the dollhouse. ~GS

Little Vegan #1 Feb 13 by Kane Lynch $8.00 – Vermont vegans have created some cruelty-free cartoon crusaders for your consumption. It’s like Dell Comics with dietary restrictions! Like a lactose-free Little Lulu! Like Richie Rich meets Rod Coronado! When the CCS meets the ALF, the TVP really hits the fan. ~GS

Ann Tenna by Marisa Acocella Marchetto $30.00 – An extremely successful but shallow celebrity gossip columnist has an intervention from her cosmic double in a realm beyond our own to make Ann realize the full cost of the humanity she has lost.

Drawings Of Various Chairs, In No Particular Order by Dan Chainer $10.00

Harper Ever After: The Early Work by Charley & Edie Harper (Pomegranate) $45.00

Cyclopedia: It’s All About The Bike by William Fotheringham (Chicago Review Press) $18.95 – Now in paperback.

Sketch City: Tips and Inspiration for Drawing on Location by by Dopress Books $29.95 – Citified sketchers will be guided through techniques for capturing frenetic street scenes as well as the rare moments of peace found in metropolitan centers with the aid of sections that include basic sketching knowledge, architecture and landscape sketching, common tools and materials, and FAQs about landscape sketching.

Get Up Stay Up: Concise Graffiti Writers Handbook by Danny Croft (Publikat) $19.95

The Culinary Cyclist: A Cookbook and Companion for the Good Life by Anna Brones (Microcosm) $9.95

When the Sick Rule the World by Dodie Bellamy (Semiotext(e)) $17.95

You Too Can Have A Body Like Mine by Alexandra Kleeman $25.99 – A missing-person mystery and an exorcism of modern culture. A woman lives with her roommate and boyfriend who wants her to join him on a reality show about eating, watching TV. Adventures, fixations and searches for meaning ensue.

Wikileaks Files the World According To the US Empire by Julian Assange (Verso Press) $29.95

The History Of Rock N Roll Songs In Ten Songs by Greil Marcus (Yale U Press) $16.00 – Now in soft cover.

Yeah Yeah Yeah: The Story of Pop Music from Bill Haley to Beyonce by Bob Stanley $17.95 – Now in soft cover.

Hitler at Home by Despina Stratigakos (Yale U Press) $40.00 – Adolf Hitler’s makeover from rabble-rouser to statesman coincided with a series of dramatic home renovations he undertook during the mid-1930s. This provocative book looks at the dictator’s three dwellings—the Old Chancellery in Berlin, his apartment in Munich, and the Berghof, his mountain home on the Obersalzberg. Author Despina Stratigakos reveals the previously untold story of Hitler’s interior designer, Gerdy Troost. 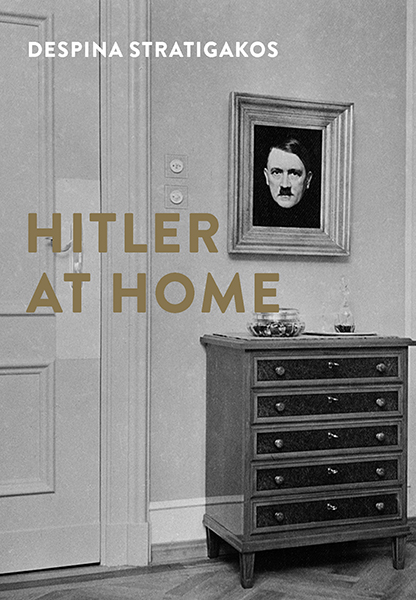 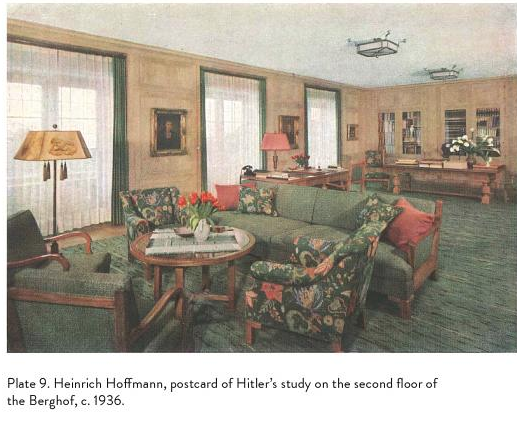 Corpses Coffins and Crypts: A History of Burial by Penny Colman $12.99

Johnny Would You Love Me If…by Brontez Purnell $13.00 – As an HIV+ writer trapped in the Bay Area’s hipster-food-service purgatory, Brontez Purnell (aka Junx from the legendary Gravy Train) is “privy to some pretty tawdry bullshit” — and he’s dishing the whole hot mess up for you ala carte, with a side of tossed salad, and a generous portion of his own soul for dessert. Purnell is a Shaolin monk of shade, with a perzinester’s unblinking addiction to confession, and the kind of razor-in-shoe sense of humor that a writer can only bless you with after signing a couple long-term leases in hell. He can dredge humor from the lowest of lows and the highest of gallows: his positive diagnosis (“I was feeling rather AIDS-y”), a 12-step program (“As part of our treatment process in Barebackers Anonymous we had to complete weekly assignments. Assignment #1: Go buy some condoms you dirty whore”), therapy (“I scheduled an appointment with my therapist even though that bitch is my worst enemy”), bad days at the bath house (“Like if you put every dude shopping at Target on any given day in towels and put them in this sex maze”). Purnell takes life’s lemons and makes a damn good mimosa. He can make you laugh through the horror, and throw in a santaria death-curse recipe at no extra cost. ~GS

The Cleaver Quarterly #5 $17.00 – The latest quarter of Cleaver is stuffed like bao with new glimpses at the many ways Chinese culture & cuisine are translated and permutated across this weird, hungry globe. Tea eggs, Hakka heritage, Mexican Chinese eats, a slice of Hawaiian-Chinese food history, Taiwanese breakfasts, the Shanghai Soup Dumpling Index. Learn that “sweet & sour chicken skeleton” is a street food that exists — then do your best to burn the image from your delicate mind. ~GS

Mirrors for Princes by Lesley Dixon $7.00 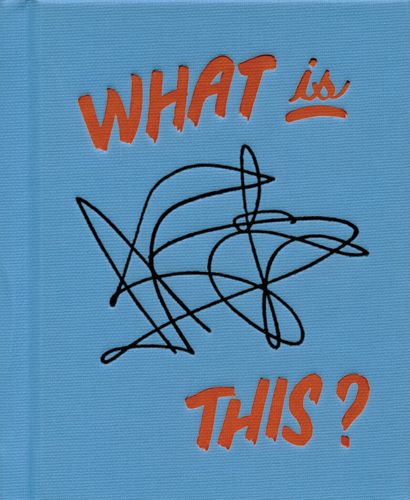 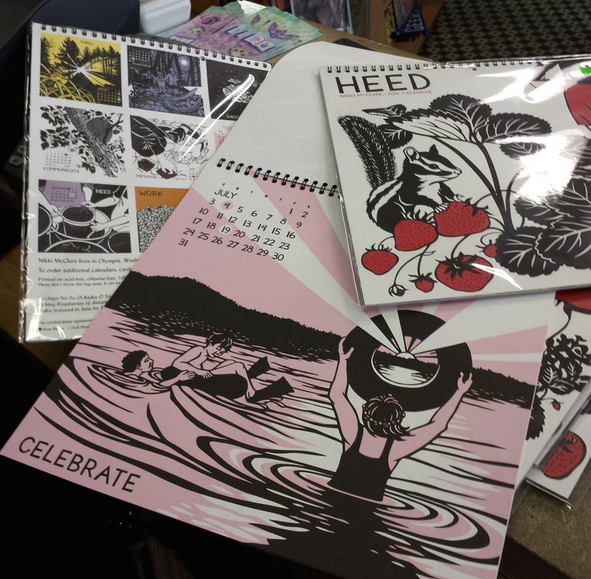 The Helpless Doorknob: A Shuffled Story by Edward Gorey (Pomegranate) $9.95 – 20 black-and-white cards to shuffle into a story in a small, decorative 3” x 4” box.

Why Yes, We Are Open on Labor Day 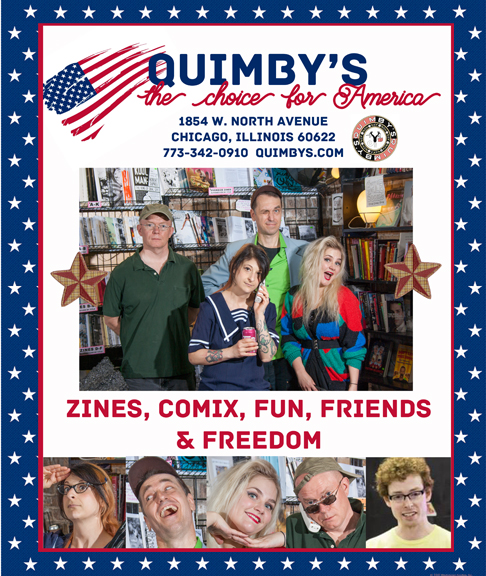 We’ll be open noon until 6pm on Monday, September 7th. 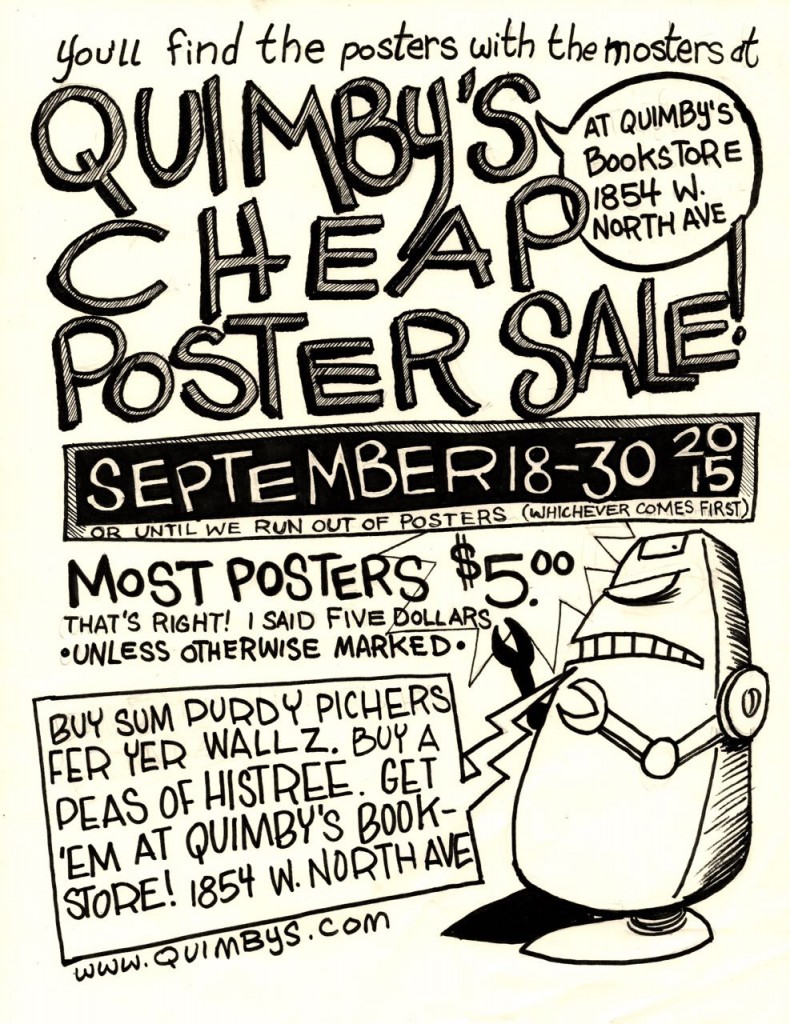 Quimby’s is holding a two-week cheap poster sale during regular store hours. We’ll have tons of posters on display, most of them just $5.00 each!

Quimby’s has been an epicenter for DIY culture for 24 years, and we’ve been collecting ephemera for a long time. We’ve amassed so many posters and prints over the years. We’re looking to unload them!

Old show posters! Ads promoting comics and zines! Prints by some of Chicago’s best printmakers! They’ll all be on sale for super cheap. Get your hands on a piece of history, and put some awesome art on your wall!