Thanks to everybody who planned, attended, ran and supported Chicago Zine Fest last weekend. It was super fun! Tonight Josh Alan Friedman will be here at 7pm to celebrate the release of his book Black Cracker.

1. OK OK You Smote Me Stories by Al Burian $3.00 – Quimby’s alum and international zine curmudgeon Al Burian has crafted a new zine exclusively for the store, the second in our “Quimby’s Exclusive” line of periodicals. In OK OK You Smote Me, Al takes us around the corner to his mayhem-prone stint on Wicker Park’s Dean Street, unhexing his way-too-hexed apartment and watching the tumult as Old Chicago takes a scraggly, low-level “stand” against encroaching yuppie “neighborhood improvement”. Compelling, humorous and wistful, with that trademark Burn Collector balance of heart and snark. -EF 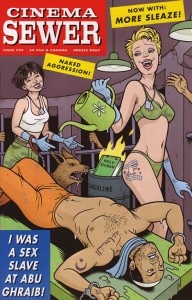 6. Filling the Void: Interviews About Quitting Drinking and Using (Doris Press) $4.00 – This zine is so solid it’s like it’s made out of rocks. Cindy from Doris Zine has collected seven interviews here that discuss sobering up from DIY and non-religious perspectives. A great and resourceful thing to have if you or someone you know is trying to clean up their act and is maybe feeling frustrated with traditional modes of support and process. Just a great and resourceful zine to have in general. -EF