David Rees Reads From How to Sharpen Pencils 8/15 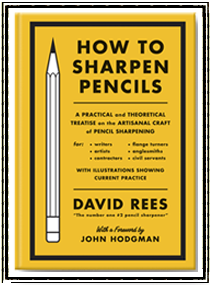 In David Rees’s new book How to Sharpen Pencils (Melville House), the creator of Get Your War On and founder of ArtisanalPencilSharpening.com shares the secrets of his craft, empowering the layman to discover the pleasures (and perils) of sharpening pencils. Over the course of 18 chapters, Rees explains the difference between sharpening techniques, including:

“How to Sharpen Pencils is very funny—it’s the work, let’s not forget, of the guy responsible for Get Your War On—but it’s no April Fools’ joke, and it’s no bathroom book. It’s a literary oddity that, even as it gleefully pursues the comic possibilities of its premise, subtly gestures towards its own secluded seriousness. And, for what it’s worth, it also marks the standard to which all future pencil-sharpening textbooks must now aspire.”

“I trust my bespoke pencils only to David Rees.”

“You may think that sharpening a pencil is easy, but David Rees makes it look hard, and that makes all the difference.”

– John Hodgman, Areas of My Expertise

The work of David Rees has been featured in such places as: Rolling Stone, GQ, Punk Planet, and The Nation. His work has also been in such anthologies as Ultimate Blogs: Masterworks from the Wild Web and The McSweeney’s Book of Politics & Musicals. He has been featured on podcasts and radio shows such as Bullseye with Jesse Thorn and The Best Show on WFMU.

Tags: David Rees, How to Sharpen Pencils.
Logging In...