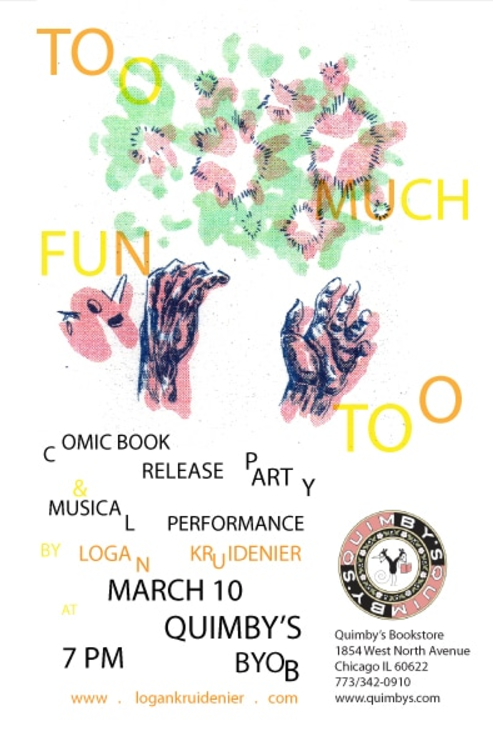 Logan Kruidenier’s experimental comic “Too Much Fun Too,” continues the mythological story of a tree-thing’s attempts to befriend and spend meaningful time with a turnip that it dug up. This work considers the nature of masochistic, repetitive routines, envious desperation and a scattered mentality.  Kruidenier loves creating work that deals with the universal, yet extremely personal theme of relationships between living beings, objects and media. TMFT also features a great poem by New York based writer and performer Connor Bush.  Logan Kruidenier has drawn major influence from artists such as Michael DeForge, Taiyo Matsumoto, Olivier Schrauwen, and video games such as Bioshock and the Super Smash Bros series.

The work of Logan Kruidenier has been featured in such places as: The Chicago Publisher’s Resource Center, Meathaus, Quimby’s Bookstore, the Mott St. Restaurant, the Beguiling, The Toronto Alternative Comics Festival, Ada Books and Desert Island Comics.

Tags: Logan Kruidenier, Too Much Fun Too.
Logging In...