Everything is Awful and You’re a Terrible Person by Daniel Zomparelli (Arsenal Pulp Press) $15.95

I Know What I’m Doing and Other Lies I Tell Myself: Dispatches from a Life Under Construction by Jen Kirkman $15.99 – Now in soft cover. 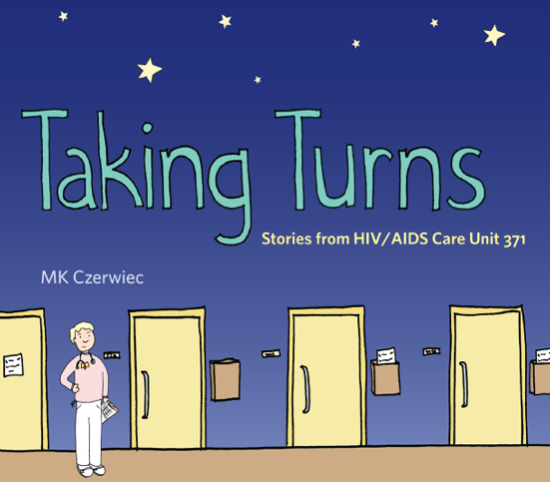 MK Czerwiec’s (pronounced sir-wick) new book Taking Turns (Penn State University Press) shares the story of Unit 371, a shining example of excellence in the treatment and care of patients. Unit 371 was a community for thousands of patients and families affected by HIV and AIDS and the people who cared for them. This graphic novel combines Czerwiec’s memories with the oral histories of patients, family members, and staff. It depicts life and death in the ward, the ways the unit affected and informed those who passed through it, and how many look back on their time there today.

Deeply personal yet made up of many voices, this history of daily life in a unique AIDS care unit is an open, honest look at suffering, grief, and hope among a community of medical professionals and patients at the heart of the epidemic

“MK Czerwiec’s tales of her nursing work on an AIDS unit chart a remarkable episode in the history of medicine. Through the lives and deaths of individual patients, written and drawn in documentary detail, we see the power dynamic between doctor and patient begin to shift. When cure is not an option, care takes on a new meaning.”         –Alison Bechdel

Czerwiec is a leader in the field of Graphic Medicine, which examines the intersection of comics and health, illness, and care giving.  Czerwiec is a co-author of the Graphic Medicine Manifesto (Penn State University Press, 2015), which was nominated for an Eisner Award. She has also self-published three collections of comics, Comic Nurse, Comic Nurse Delivers Another Dose, and Scars, Stories, and Other Adventures. 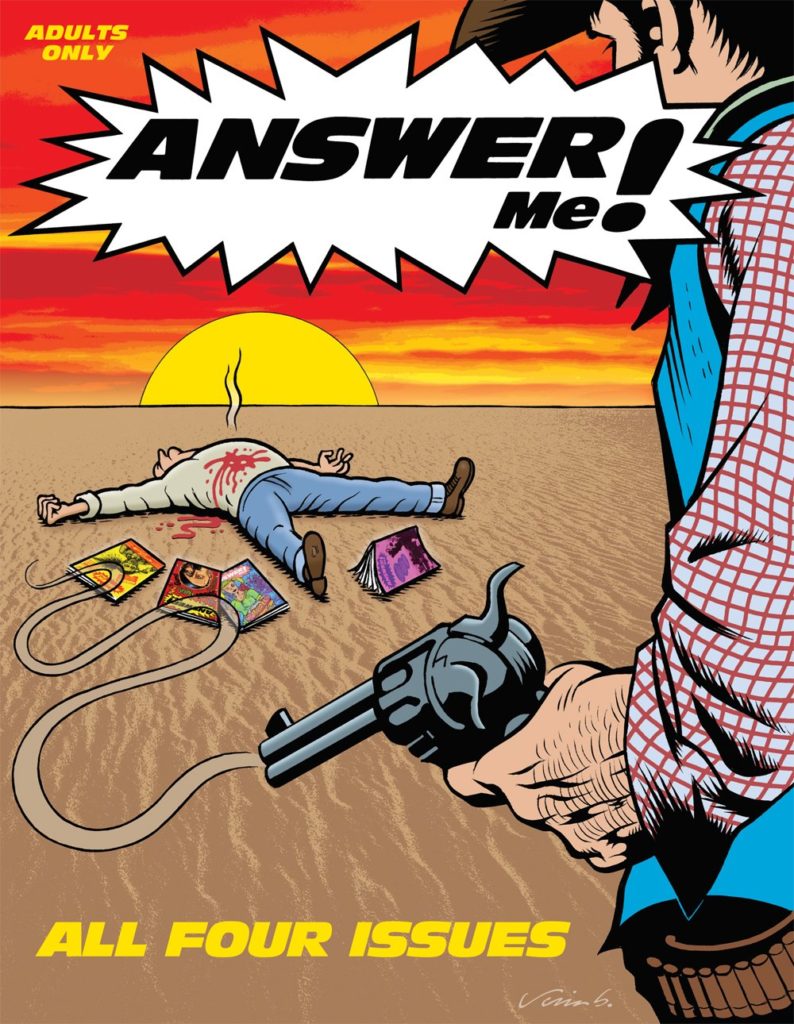 ANSWER Me! All Four Issues by Jim Goad and Debbie Goad (Nine-Banded Books) $30.00 – For the first time ever, all four issues (including THAT one, yes). Billed as “The Only Magazine Worth Hating,” this version comes with extras, including previously unpublished material!

Lot of Options by David Pregerson $10.00 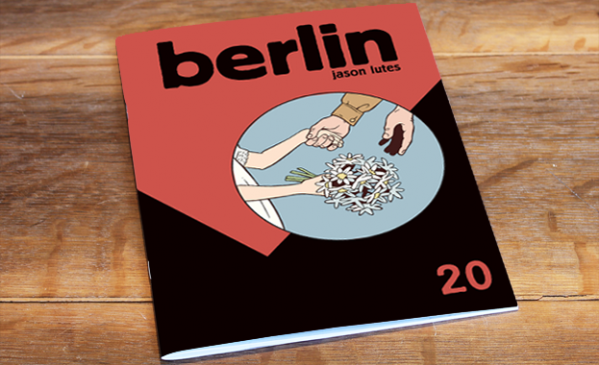 Berlin #20 by Jason Lutes (D+Q) $5.95 – With its twentieth issue, one of the biggest graphic novel events of the early 21st century is fast-approaching—the completion of Jason Lutes’ epic Berlin series. Here, the inevitable antagonist of the tale of pre-WWII Germany begins to take center stage. Marthe and Kurt find their way back to each other—he, from the bottom of the bottle and she, from a one-sided relationship. Fascism creeps into every corner of society, but some can see it better than others.

No One is Born Complete by Jarad Solomon $8.00

Imagine Wanting Only This by Kristin Radtke $29.95

Animals of a Bygone Era: An Illustrated Compendium by Maja Säfström $14.99 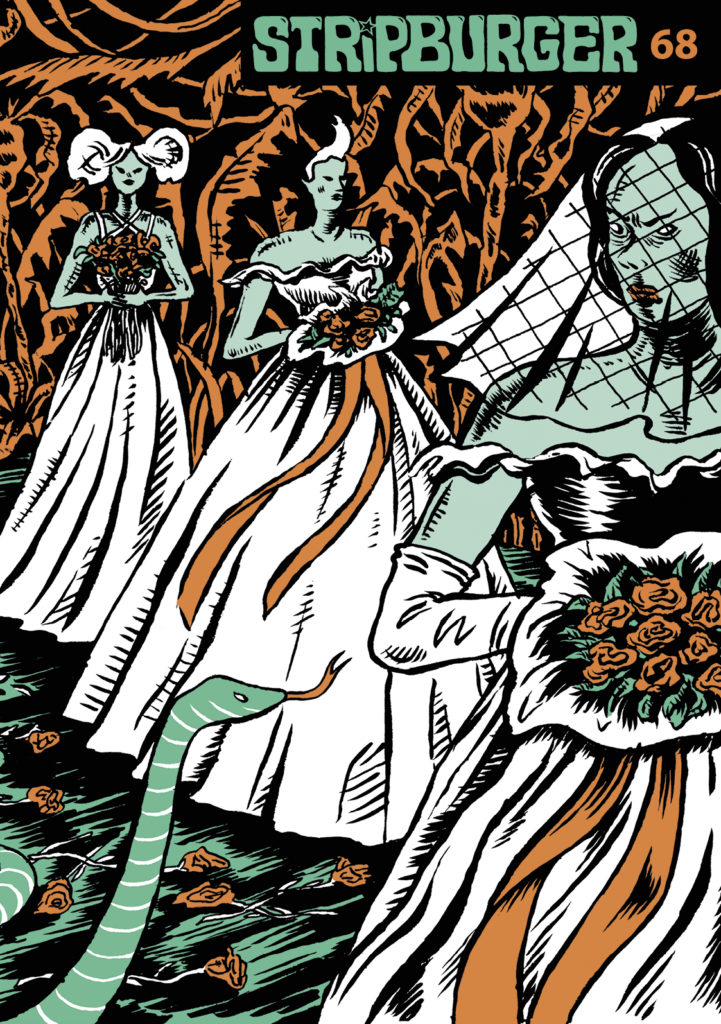 Talk About Street Art edited by Jerome Catz and Elisabeth Couturier $9.98 – Anthology about this underappreciated, ephemeral, and illegal art form.

Trouble in Paradise: From the End of History to the End of Capitalism by Slavoj Žižek (Melville House) $17.99 – Draws insights from phenomena as diverse as “Gangnam Style” to Marx, The Dark Knight to Thatcher.

Enemies of Society: An Anthology of Individualist and Egoist Thought by various (Nine-Banded Books) $20.00

Here We Are: Feminism for the Real World by Kelly Jensen $16.95

A Really Good Day: How Microdosing Made a Mega Difference in My Mood, My Marriage, and My Life by Ayelet Waldman $25.95

Murder in Plain English: From Manifestos to Memes–Looking at Murder through the Words of Killers by Michael Arntfield & Marcel Danesi $24.00

Bad Days in History: A Gleefully Grim Chronicle of Misfortune, Mayhem, and Misery for Every Day of the Year by Michael Farquhar $14.99 – Now in soft cover!

The Geography of Madness: Penis Thieves, Voodoo Death, and the Search for the Meaning of the World’s Strangest Syndromes by Frank Bures $16.99 – Now in soft cover!

Party Like a President: True Tales of Inebriation, Lechery, and Mischief From the Oval Office by Brian Abrams, illustrated by John Mathias $14.95

The Familiar, Volume 4: Hades by Mark Z. Danielewski $26.95 – Fourth book in the acclaimed series from the author of House of Leaves.

The Erstwhile: The Vorrh (2) by Brian Catling $16.95 – Sequel to The Vorrh. The angels that failed to protect the Tree of Knowledge are reanimating themselves, and their reawakening will have major consequences.

Infinite Tuesday: An Autobiographical Riff by Michael Nesmith $28.00 – Put on your knit cap and journey from the the set of The Monkees to the heart of swinging London and beyond!

Make Trouble by John Waters, illustrated by Eric Hanson $14.95 – Based on the graduation speech Waters gave to RISD grads. Eavesdrop, he tells them, and listen to your enemies, and horrify with new ideas! The perfect advice for artists of any age.

Splatter Capital: A Guide for Surviving the Horror We Collectively Inhabit by Mark Steven (Repeater Books) $14.95 – A discussion about splatter horror films as a metaphor for the nightmare of systematized bloodshed caused by capitalist accumulation.

Clara Cakes: Delicious and Simple Vegan Desserts for Everyone! by Clara Polito (PowerHouse) $24.95 – She sold her cakes at punk shows. Now get her recipes!

From The London Library’s “Found on the Shelves” series:
*Cycling: The Craze of the Hour by Charles Spencer & friends $9.95 – From that velocipede craze of the 1890s!
*On Corpulence: Feeding the Body and Feeding the Mind by Lewis Carroll and William Banting $10.95 – Tweedledum and Tweedledee — fat seemed to be getting fatter under Queen Victoria! Lewis Carroll and overweight undertaker William Banting elaborate on the vices of consuming too much “fatty” food and culture. Oddly prescient for our contemporary culture full of crappy media overload.
*The Gentlewoman’s Book of Sports by Lady Greville and Lady Colin Campbell $10.95 – It wasn’t easy being a sportswoman at the end of the nineteenth century!

CraftFail: When Homemade Goes Horribly Wrong by Heather Mann $12.95 – From the files of CraftFail.com! 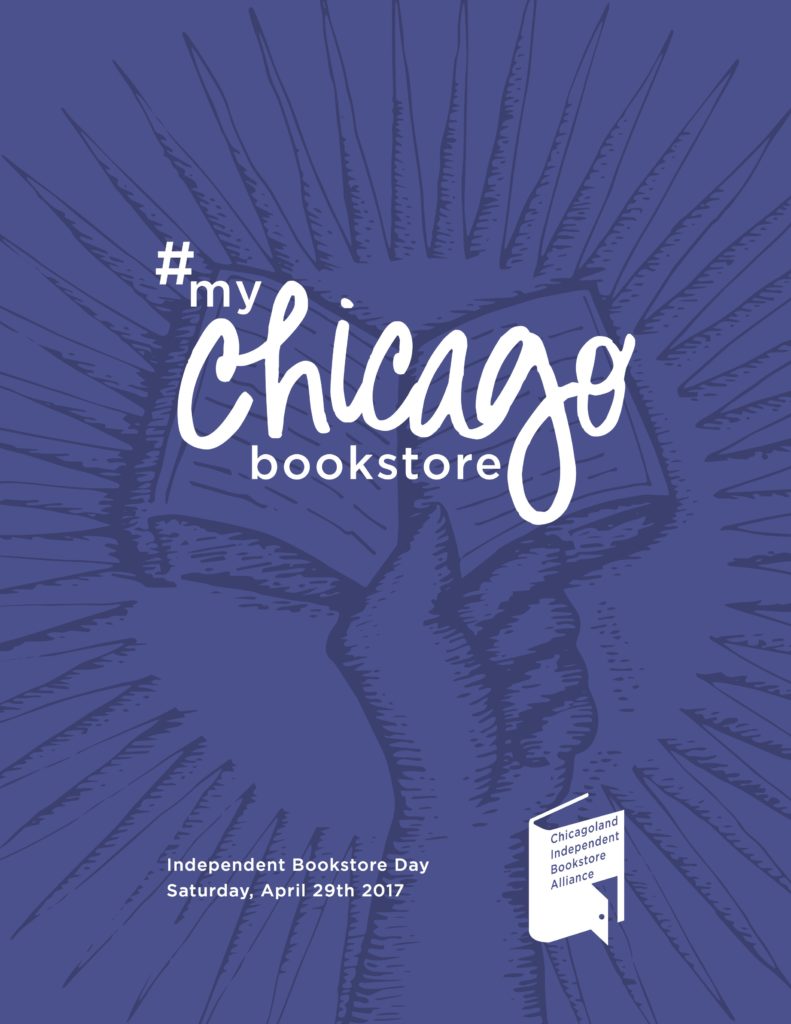 On Saturday, April 29th Quimby’s Bookstore, along with two dozen independent bookstores all over the Chicago area, are collaborating to make this year’s Independent Bookstore Day (IBD) an event that celebrates the vibrancy of Chicagoland as a dream destination for book lovers. Each store creates its own unique events and Quimby’s is no exception.

Quimby’s is celebrating IBD in two ways. First, we welcome co-authors Steven Nodine and Eric Beaumont will celebrate the release of Brick Through the Window: An Oral History of Punk Rock, New Wave & Noise in Milwaukee, 1964-1984, celebrating our midwest sister city Milwaukee (because hey, let’s show some major metropolises the love on this one-day party). More info on that event at 7pm here.

Secondly, Quimby’s will collaborate with at least 24 stores, jointly sponsoring the #MyChicagoBookstore Challenge, which encourages book lovers to indulge in bookstore tourism by visiting 10 or more stores on that one day.

To begin their trip, readers can pick up a #MyChicagoBookstore carabiner and their first “luggage tag” from the store of their choice (from any of the independent bookstores listed below) with an initial purchase of $25 or more. Get it? “Luggage Tag,” as in Chicago being a dream destination for book lovers? As in, where books take you, somewhere?! SO CLEVER.

Bookstore visits throughout the day (no purchase required) enable them to collect an additional tag at each subsequent bookstore. The payoff comes for visits at the following levels:

Also, readers are encouraged to post a snapshot of themselves and their Independent Bookstore Day haul, and enter to win more prizes!

The #MyChicagoBookstore Challenge is being sponsored by the Chicagoland Independent Bookstore Allliance (ChIBA), an association formed last year to raise awareness about the vitality of the area’s indie stores. ChIBA also maintains a Facebook page–#MyChicagoBookstore—where all member stores can post readings and other literary events to create one central “billboard” for literary culture in the greater Chicago area. 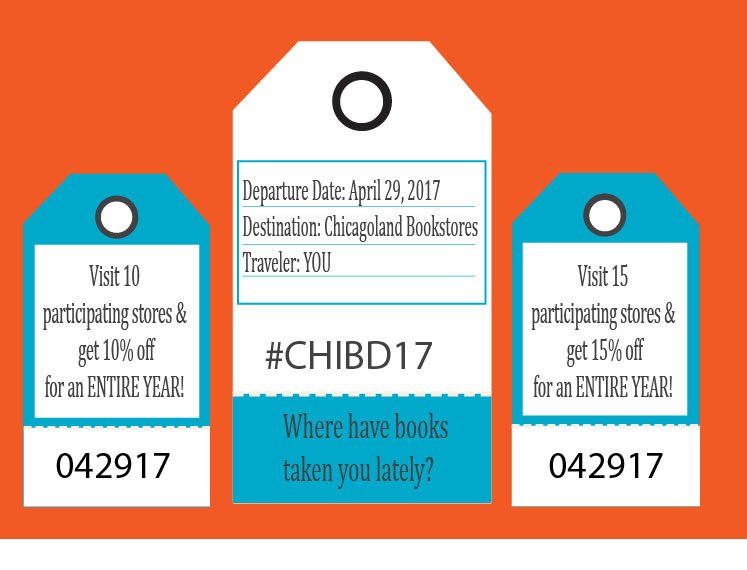 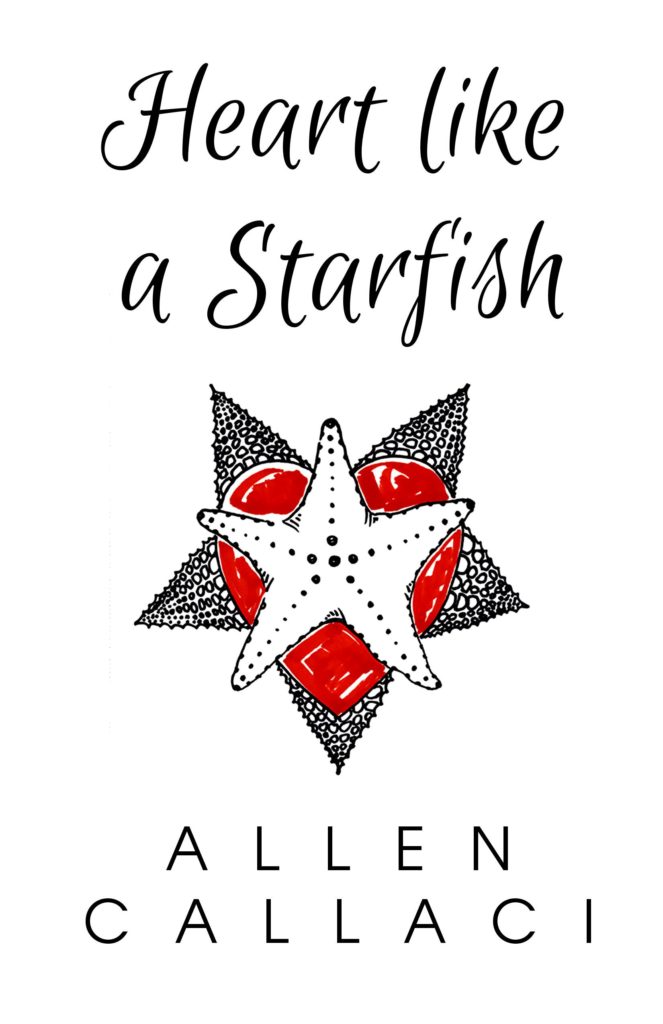 Heart transplant recipient and lead singer of lo-fi pioneers Refrigerator Allen Callaci will make his first ever appearance in Chicago to sing a few songs and read from his memoir Heart Like a Starfish (Pelekinesis Press).

Heart Like a Starfish is Callaci’s account of that death-defying journey on which he had been given a 20% chance of survival. Callaci’s wonderfully chaotic tale is filled with music and pop cultural references and is told in a Kurt Vonnegut-esque style that captures the horror, humor and healing of his experience.

Callaci has written for The Huffington Post, BK Nation, Inland Weekly and was selected as Inlandia Institute’s author of the week. Heart Like a Starfish was selected as a recommendation by Small Press Distribution for December 2016.

“Allen shares his amazing story by locating his personal experience in the midst of a network of relationships that sustain and define his life.” –John Davis (Folk Implosion)

“For any generation… An astonishing story about how close life is to death.” – Claudia Lennear, featured singer in the Oscar-winning documentary “20 FEET FROM STARDOM” 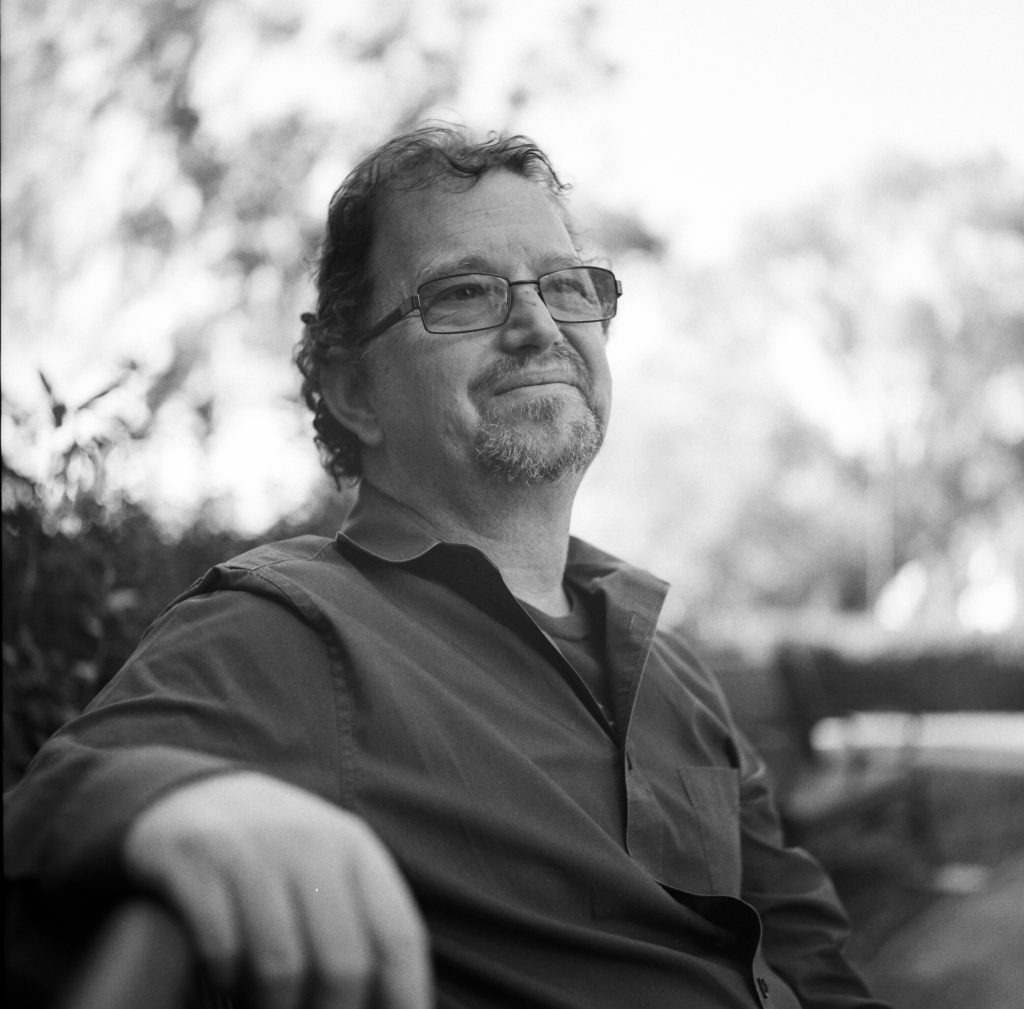