Think Tank DIY #2 A Zine Full of Ideas you can Take and Use And Maybe Get Rich Off by Reggie Martinez $2.00

Welcome To Your New Life With You Being Happy by Rachel Bell $7.00

titles from Adam Gnade:
Friends Get Wayward Notes on Traveling In America $5.00
And In My Dreams Youre Alive and Youre Crying $3.00
My Brain was a Shark Eating Itself a Prelude to Subterranean Homestead Blues $5.00

Hard Fifty Farm #2 What Becomes of the Broken Hearted by Jessie Duke $4.50

Hunter S. Thompson’s Fear and Loathing in Las Vegas, adapted by Troy Little (Top Shelf) $24.99 – A savage journey to the heart of the American Dream. Join Thompson’s alter ego Raoul Duke on the mother of all Vegas benders, as he and his attorney Dr. Gonzo cover a motorcycle race, crash a drug-enforcement convention, and rack up obscenely large room-service bills, all while dosed to the gills on a truly spectacular assortment of mind-altering substances. 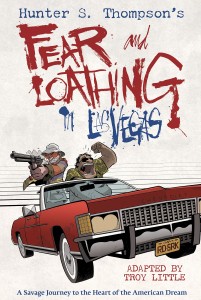 101 Artists To Listen To Before You Die by Ricardo Cavolo $22.99 – A personal journey filled with hilarious anecdotes through the history of music, at the hand of one of Spain’s most internationally renowned illustrators. A graphic novel in the form of Ricardo Cavolo’s personal diary, which follows the story of music through 101 essential artists; from Bach to Radiohead, to Amy Winehouse, Nirvana and Daft Punk. With over 100 uniquely colourful illustrations and handwritten text, lists, notes and personal anecdotes. 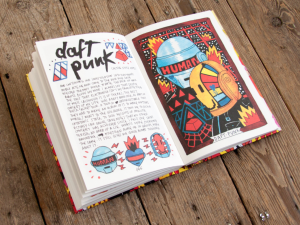 1000 Fashion Details by Natalio Martin (Booq Publishing) $29.99 – Fashion talents from around the world reveal the magnificence of their individual haute couture techniques that they combine with innovative advances.

Art Forms from the Abyss by Ernst Haeckel $29.95

Trigger Warning: Short Fictions and Disturbances by Neil Gaiman $16.99 – Now in soft cover! This book includes previously published pieces of short fiction—stories, verse, and a very special Doctor Who story that was written for the fiftieth anniversary of the beloved series in 2013—as well “Black Dog,” a new tale that revisits the world of American Gods, exclusive to this collection.

Familiar vol 2 Into the Forest by Mark Z. Danielewski (Pantheon) $25.00

Dis-condition of Ease by Owen Patterson $9.95

Murder Most Serene by Gabrielle Wittkop (Wakefield Press) $12.95 – By the self-styled heir to the Marquis de Sade, Gabrielle Wittkop (1920-2002) writes a tale darkness, death, poison and transgression, that is also an over-the-top, tongue-in-cheek Venetian romp.

Exemplary Departures by Gabrielle Wittkop (Wakefield Press) $16.95 – “Exemplary” deaths in various exotic locations around the globe including the assassination of hermaphroditic twins in a stagecoach and a gentleman spy disappearance with his secrets into the Malaysian jungle. A true modern inheritor of the legacy of the French Decadent writers, Wittkop spins these tales with her trademark macabre elegance and chilling humor, maneuvering in an uncertain space between dark Romanticism, Gothic Expressionism and Sadean cruelty.

The Other Paris by Luc Sante $28.00 – A whirlwind tour of those who represent another side of Paris: the outcasts, criminals and eccentrics. This book draws on testimony from a great range of witnesses-from Balzac and Hugo to assorted boulevardiers, rabble-rousers, and tramps.

Someplace Else: On Wanderlust, Expatriate Life, & the Call of the Wild by Bart Schaneman (Punch Drunk Press) $14.99 – Explores the themes of travel, of living abroad and of returning home after five years of living out of country.

Scream: Chilling Adventures in the Science of Fear (PublicAffairs) $26.99 – Kerr is a sociologist prof but also works for ScareHouse, a haunted house in Pittsburgh. She also co-runs academic studies of fear. She went around the world researching fear in different contexts: roller coasters, places rumored to be haunted (like abandoned prisons), countries known for their high crime, a Japanese forest with a reputation for high suicide rates, etc. It’s a fascinating read but also, it’s a bit like the charmingly chatty and fun science writing of Mary Roach (who wrote books like Spook, Gulp, and so on). But it also has that personal journey feel to it to. So it’s more than a sociological or scientific study. It’s sort of memoir-y and sometimes kind of natural history-ish too. -LM

Woman With a Worm in Her Head and Other True Stories of Infectious Disease by Pamela Nagami, MD $16.99

Hunger Makes Me A Modern Girl: A Memoir by Carrie Brownstein $27.95

The Rap Year Book: The Most Important Rap Song From Every Year Since 1979, Discussed, Debated, and Deconstructed by Shea Serrano, illustrated by Arturo Torres, foreward by Ice-T (Abrams) $18.95 – Complete with infographics, lyric maps, uproarious and informative footnotes, portraits of the artists, and short essays by other prominent music writers.

The Art of Rock: Posters from Presley to Punk, A Spectacular Visual and Oral History by Paul Grushkin (Abbeville Press) $45.00

W. C. Whitfield’s Mixed Drinks and Cocktails – An Illustrated, Old-School Bartender’s Guide. by W. C. Whitfield, illustrated by Tad Shell $26.99 – Bartenders were the rock stars of the 30s and 40s. This book combines two W.C. Whitfield books of recipes from this time period: Just Cocktails (published in 1939) and Here’s How: Mixed Drinks (1941). Learn everything you need to know about mixing drinks, as well as over 400 drinks including the Brandy Blazer, the Uncle Sam Highball and many more!

Cocktails of the Movies: An Illustrated Guide to Cinematic Mixology by Will Francis, Stacey Marsh (Prestel) $19.95 – From Marilyn’s Manhattan in Some Like It Hot to The Dude’s White Russian in The Big Lebowski there’s something for everyone. Each cocktail is accompanied by the recipe, method, a history of the drink and a synopsis of its scene in the movie alongside full-color original artwork.

The Mad Feast: An Ecstatic Tour Through America’s Food by Matthew Gavin Frank $35.00

Death: A Picture Album by Wellcome Collection (DGV) $28.00 – Disturbing, macabre, and moving: the images in this book examine our enduring desire to make peace with death. Chosen from the spectacular collection of a death-obsessed print dealer from Chicago, Richard Harris, they include art from an array of time periods, places, and traditions. Works by Linda Connor, Robert Mapplethorpe, Andy Warhol, Otto Dix, and Francisco Goya are shown alongside Renaissance vanitas paintings, Japanese Ukiyo-e woodcuts, photographs of Mexico’s Day of the Dead and eerie snapshots from 1900s of anonymous sitters posing with skulls and skeletons. 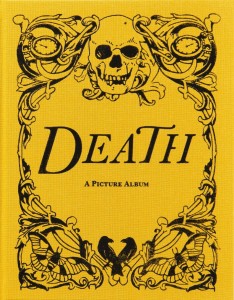 Levitation: What It Is, How It Works, How to Do It (Mind, Body Knowledge Series) by Steve Richards (Weiser) $14.95 – So uplifting! Hahahahahahahaha.

Self Publish Be Happy: A DIY Photobook Manual and Manifesto by Bruno Ceschel (Aperture) $29.95

Introduction to Intuition and Clairvoyance by Kelly Cree and Jessica Mullen $5.00

Anything for a Vote: Dirty Tricks, Cheap Shots, and October Surprises in U.S. Presidential Campaigns by Joseph Cummins $19.95

Die Gestalten Verlag kids books from their “Little Gestalten” imprint:
Issun Boshi: The One Inch Boy by Ichinori $19.95
Alphabetics: An Aesthetically Awesome Alliterated Alphabet Anthology by Patrick and Traci Concepción $16.95
Night Watchman by Phillipe Fichot $24.95
Lets Bake: A Step by Step Introduction by Clara Lidström and Annakarin Nyberg $19.95
How Big is Big? How Far is Far? by Jan Van Der Veken $24.95 – The Queen of England’s crown weighs more than 100 portions of cotton candy! 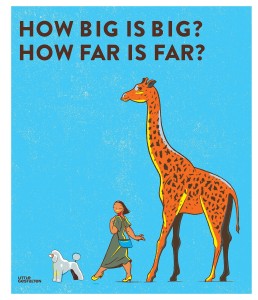 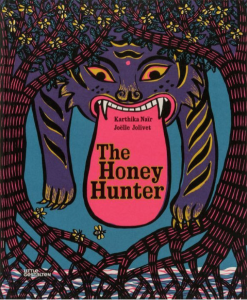