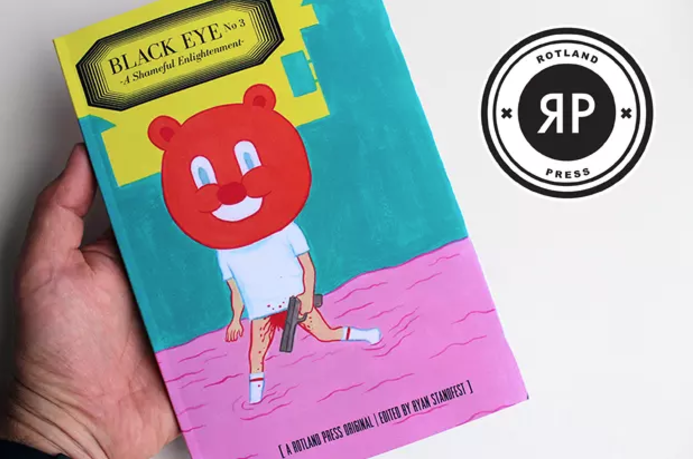 This event is occasioned by the publication of BLACK EYE No. 3, the final and timely volume of the Ignatz-nominated Black Eye, the anthology of humor and despair published by Rotland Press. This all-comics issue compiles 136 pages with a jaundiced eye on the zeitgeist. Subtitled “A Shameful Enlightenment,” it is a riff on the absurdity of our times, as charted by a coterie of 36 international cartoonists. Black Eye No. 3 will thrill, sicken, amuse, titillate, horrify, and fortify. This event is an opportunity to bring together five of the contributing artists who are based in Chicago: Andy Burkholder, Corinne Halbert, Paul Nudd, Onsmith and Johnny Sampson. Copies of BLACK EYE No. 3 will be available for purchase, as well as a limited edition letterpress print by Paul Nudd, and a limited edition risograph print by UK artist Ben Jones. The Sightseer’s Complement, a limited run, 40-page supplemental book to Black Eye No. 3 will also be available for purchase and signing.

“Ryan Standfest brings together an exquisitely curated collection of funny, dark, and beguiling comic art for Black Eye No. 3. I’m going to read my copy by a roaring arson blaze.”  —Kaz, Creator of the comic strip Underworld

Founded in 2010, ROTLAND PRESS is a small publishing house located in Detroit, Michigan, USA. It is a publisher of printed projects that promote subversive humor— be it black, dark, gallows, satirical or absurd. ROTLAND PRESS aims to occupy a place between the mainstream and the avant-garde, the philistine and the genteel, industriously manufacturing the finest in despairing entertainment. Ryan Standfest in the Publisher and Editor-In-Chief. More info: rotlandpress.com

Quimby’s Bookstore Podcast #3 Is Up!

Editor Ryan Standfest discusses BLACK EYE 1: Graphic Transmissions to Cause Ocular Hypertension, an anthology that collects original narrative comics, art and essays by 41 international artists and writers, all focused on the expression of black, dark or absurdist humor. (And yes, we carry it at Quimby’s.) Ryan was here this past June 24th, to celebrate the Chicago release with some of the local artists included in the anthology. 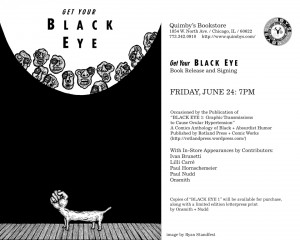