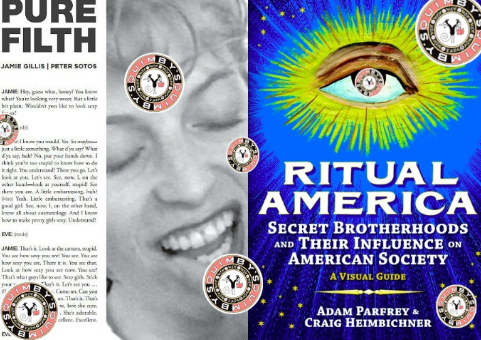 Stream or download this episode and past episodes (it’s free!) on our Podbean site at quimbys.podbean.com.

Or find us on I-Tunes!

ADAM PARFREY presents the strange history of secret societies in America in a slide show.

“Adam Parfrey is one of the nation’s most provocative publishers.”—Seattle Weekly

Based in Port Townsend, Feral House and Process Media are two of the most adventurous, often surprising publishers in the U.S., with a bent for revealing the otherwise obscured, undisclosed or under-documented. Adam Parfrey, himself a writer but also the publisher of both these presses, comes to Quimby’s, to talk and show images from his own new book, Ritual America: Secret Brotherhoods and Their Influence on American Society: A Visual Guide (Feral House)  co-authored with Craig Heimbichner. Ritual America illuminates the context and preponderance of American males who belonged to fraternal orders and the place of things today in new ways.”

Ritual America won a silver medal from the IPPY awards for American history.

Jamie Gillis appeared in over one hundred films, and as such was a primary performer in pornography’s “Golden Age.” Gillis is also known for inventing the “Gonzo” genre of pornography, played out in the film Boogie Nights by Burt Reynolds’ character.

Pure Filth appears as transcripts from the films Jamie produced during these early years of radical and highly personal pornography.