But I though our faithful nerds might want to check this out!

with an EXTRA BONUS: Jeffrey Brown (clumsy, Unlikley, I am Going to Be Small)  and Christian Slade (Korgi)  will be signing books and comics! So not only can you get FREE Comics, but you can get your stuff signed too!

more info after the jump

END_OF_DOCUMENT_TOKEN_TO_BE_REPLACED

Art Nerds! Get on it!

Wake up, the Art Fair wars are over! The free booze has been drunk! The smoozing has subsided. So what do we do now.  You come buy the hot of the presses new issue of Cabinet! (& and grab a copy of Proximity…if you missed out on its release this weekend) Wow!

Let the Art Madness continue! Its all way to conceptual in here. Peace I’m OUT!!!!!! 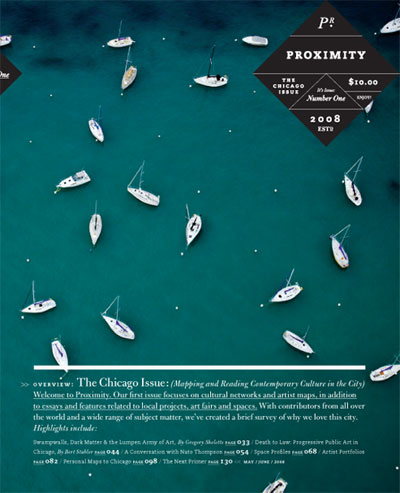 END_OF_DOCUMENT_TOKEN_TO_BE_REPLACED

Kevin Sampsell is the author of Beautiful Blemish (Word Riot Press), the editor of The Insomniac Reader (Manic D Press), and the publisher of Future Tense Books in Portland, Oregon. His new book of short fiction, Creamy Bullets, is due out this spring from Chiasmus Press.

James Stegall publishes books and distills liquor in Eugene, Oregon. His writing has appeared in Nerve, Flak Magazine, Eyeshot and others. So New Media (www.sonewpublishing.com), his press, has published work by Amy Guth, Neal Pollack, David Barringer, Jami Attenberg, Jen Michalski and many other amazing writers.

Jackie Corley writing has appeared on-line at MobyLives.com, 3AM Magazine and Pequin.org and in various print anthologies. She is the publisher of online literary magazine Word Riot (www.wordriot.org) and its print extension, Word Riot Press. Her short story collection, The Suburban Swindle, is coming out Summer 2008 from So New Media. Visit her personal website at jackiecorley.wordriot.org.

High-performance prose readings by Tim W. Brown, author of Walking Man, and Paul McComas, author of Planet of the Dates.

Tim W. Brown is the author of two published novels, Deconstruction Acres (1997) and Left of the Loop (2001). His novel Walking Man is forthcoming in 2008. Brown’s fiction, poetry and nonfiction have appeared in over two hundred publications, including Slipstream, Chelsea, Pleiades, Another Chicago Magazine, The Ledge, Storyhead, Rockford Review, Bridge, Oyez Review, American Book Review, The Bloomsbury Review, RE:AL, Chiron Review, Rain Taxi, Small Press Review, Main Street Rag and New Observations. He currently serves on the executive council of the New York Center for Independent Publishing, and he is a member of the National Book Critics Circle.

A long-time resident of Chicago, where he was a fixture in that city’s literary scene as a literary performer and publisher of the poetry zine Tomorrow (1982-1999), Brown moved to New York in 2003.

Paul McComas was born and raised in Milwaukee. He received his BA in English at Lawrence Univ. in Appleton, WI, and his MA in Film at Northwestern Univ. His short fiction has appeared in numerous literary magazines, and he is the author of two critically acclaimed books: a novel, Unplugged (2002, John Daniel & Co.), and a short story collection, Twenty Questions (1998, Daniel & Daniel), now in its third printing. Paul’s comedic coming-of-age novel, Planet of the Dates, will be published in February 2008 by prestigious New York-based indie publisher The Permanent Press.