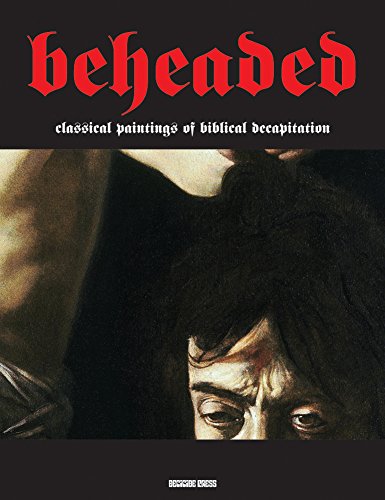 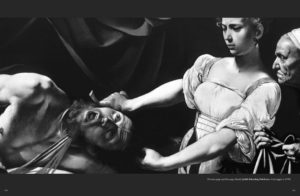 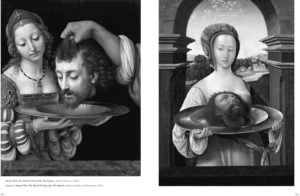 Beheaded: Classical Paintings Of Biblical Decapitation (Illuminated Masters) by Gianfranco Sodoma (DEICIDE PRESS) $24.95 – Lose your head over this holiday book. The two centuries from 1500 to 1700 saw a great rebirth of European art, including a massive body of works devoted to biblical subjects. Amongst these are three narratives which focus in particular on death and decapitation – Salome’s demand for the severed head of John the Baptist, Judith’s seduction and beheading of Holofernes, and David’s felling and beheading of Goliath. BEHEADED collects more than 80 Renaissance and early Baroque period paintings depicting these three violent myths, a catalogue of full-color images steeped in blood, death, and the occasional frisson of erogenous horror. The artists featured include Caravaggio, Mattia Preti, Andrea Solario, Orazio Borgianni, Carlo Dolci, Guido Reni, Sebastián de Llanos Valdés, Pieter Fransz de Grebber, Lucas Cranach, Massimo Stanzione, Peter Paul Rubens, Valentin de Boulogne, and many others. Illuminated Masters is a new series of high-quality art books featuring the work of classical artists from the 15th to 17th centuries.

Faith Harper zines, $4.00 each:
This Is Your Brain on Grief: What to Do and Say and Not For Yourself and Others
Getting Over It: When Other People Are Total Assholes or You’re Just Tired of Your Own Bullshit

Sit with Satan/Hail Santa (Eternia Press) $5.00 – Is Sit with Satan/Hail Santa a bitingly funny critique on the capitalist nightmare Christmas has become or just the weirdest, evilest high-art pamphlet since the Chick Tracts? You decide! A downright hilarious holiday read full of Letterist International/Situationist-style détournement from the press that brought you Niceferatu, the coloring book Dungeons & Dragons Monsters Saying Inspiring Shit, and Skeletor’s Guide to Self-Care! Featuring actual Satanic chants you can perform with your family around the hearthside!

Colonization Decolonization: A Manual For Indigenous Liberation in the 21st Century $4.00

Good Riddance, A Zine About Stuff #2 by Megan Kirby and Rosamund Lannin $4.00

Cook Your Own Food: A Bill Murray Scratch and Sniff $9.00

Peter Bagge: Conversations by Kent Worcester (U of Miss) $25.00

Krazy: George Herriman, a Life in Black and White by Michael Tisserand $35.00

Fight Your Own War: Power Electronics and Noise Culture by Jennifer Wallis $21.95

Finding Joseph I: An Oral History of H.R. from Bad Brains by Howie Abrams and James Lathos (Lesser Gods) $26.00

The Complete History of The Return of the Living Dead by Christian Sellers and Gary Smart (Plexus) $24.95

The Art of Archer by Neal Holman (Dey St) $29.99 – A fully illustrated and highly visual guide to everything Archer—from storyboards to character sketches to script excerpts—making it a collector’s item for Archer fans everywhere, and featuring a foreword by Christian Slater.

Creepy Krampus: Coloring Book For Fantasy Fans of All Ages by by Monte Beauchamp (Last Gasp) $12.95

The Weiser Book of the Fantastic and Forgotten: Tales of the Supernatural, Strange, and Bizarre by Judika Illes (Weiser) $16.95

How to Be a Hobo by Brooke Willett (Free Press Publications) $9.45 – This self-help, memoir, survival guide is designed to help hobos not only make it through the day, but to come to love and enjoy every blessed moment of this feral life. Written by by Brooke Willett, who hit the road with her dog when her life fell apart. She put on a knapsack, and they started walking. She was able to navigate her way through challenges and obstacles, getting odd jobs along the way, and hopping freight trains as a main mode of transport, when one day she awoke in the forest, looked around the jungle of homemade shelters, and realized she had become… a hobo… and would ultimately come to know exactly what it means to survive.